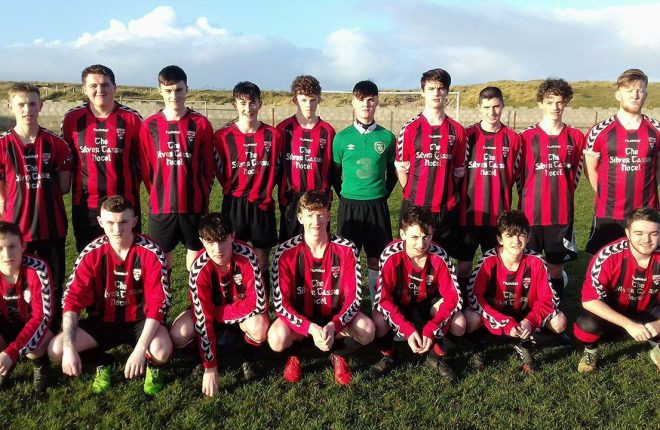 Niall Doherty says his Fanad United youth side will be taking nothing for granted as they prepare to travel the long road to Keadue on Saturday.

A win over Keadue Rovers would clinch the Dick Duffy Memorial league title for a Fanad team which has had a barnstorming league campaign so far.

Doherty has just taken on the reins as manager this year, having helped out in a supporting role previously, but he will be hoping to win the league title in his first season in charge.

And what a season it has been so far, with his side having racked up ten wins and a draw from their eleven league games to date – and with three games left to play – a single win would put them out of reach.

Even a draw against second-placed Keadue Rovers could be enough to win the league at this stage of the competition as denying the Rosses side a full tally of three points would mean that Saturday’s opponents would face a very difficult, uphill battle to catch Fanad, as Doherty’s charges would need just one more point to be be crowned champions.

The two sides already met in Triagh-a-Loch this year in the fourth game of the season, with the lads from the north of the county winning 3-1.

Doherty acknowledged that it was a tough encounter but says his team is very well prepared for the game at the weekend and he is hoping that they can come out on top once again.

“The boys have been playing very well this year but we know we’re in for a very tough game and we’ll be taking nothing for granted. Keadue are a difficult team to play against so we’ve been preparing and training hard. All the boys understand the importance of this match.”

He has a lot to be positive about as well: “This is the first game of the year in which we’ll have a full squad available for selection. We have no injuries or suspensions so we’ll be taking seventeen players down on Saturday. That’s a great position to be in and gives us a bit of confidence.”

Doherty also noted the quality which he has available for selection.

“Michael Devine has had a fantastic season up front for us. He has scored twelve goals in the league so far and is our top scorer by a considerable amount.

“We also have great strength in the middle of the field with Sean Little, Jamie McKinney and Darren McElwaine playing brilliantly together.”

His goalkeeper, Dane Dunsworth – who has played for the Donegal League select throughout the year – also came in for some praise.

“Dane has been brilliant for us. He has only conceded six league goals this year in our eleven games. That’s a great record. He’s a brilliant keeper and he has been a very influential member of the team.”

It has been some time since Fanad last won the Donegal Youth League title – with the trophy last coming to Triagh-a-Loch in 2011 – so Doherty is hoping that a big crowd will come to support his side on Saturday.

“We have enjoyed great support throughout the year. A lot of parents have travelled to the games and it’s great to have them there to give encouragement to the lads.

“I hope that we’ll have a good crowd out on Saturday and hopefully we’ll give them something to cheer about.”