THE Dubs are coming to town this weekend and they are always a big attraction.

They’ll take a great crowd with them to Ballybofey this Sunday, and they’ll be sure to bring plenty of noise and colour.

Jim Gavin would probably not have been overly happy with the performance against Tyrone in their last game, and their tally of ten points was low.

To me, it’s a good time to get Dublin. Yes, they have brilliant players all over the field, but they’re not long back from holiday and are probably doing heavy training at the moment to get up to speed.

They will improve considerably and, in my opinion, they will be at a completely different level in four or five months time. 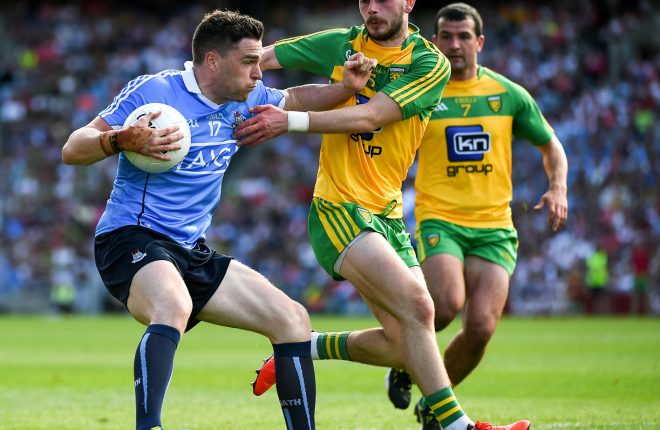 There’s a lot made about Dublin’s numbers, and their resources, and people think that they have an unfair advantage.

However, I think that they are enjoying a golden generation of players at the moment like Bernard Brogan, Stephen Cluxton, Paul Flynn and Diarmuid Connolly.

Once those players leave the scene, I believe that they are going to find things difficult.

Dublin have won a couple of minor and under 21 titles over the last five years, but they’re not exactly dominating the underage scene.

They have still got quality young players, but some of their underage stars are finding it hard to break through and establish themselves.

Brian Fenton came from relative obscurity to nail down a starting position, but others have not had the same kind of luck.

If you look at the likes of Paul Mannion, Cormac Costello, and David Byrne, they were all superb minors, but have yet to cement themselves as senior regulars.

A couple of years ago, Conor McHugh looked like he was going to be the next best thing, but there has been a bit of traffic in front of him in the attacking division, and Colm Basquel and Con O’Callaghan are also part of that pecking order now too.

It will be interesting to see how Jack McCaffrey fares out this season.

He was Footballer of the Year in 2015, but Dublin didn’t really miss him when he was unavailable last season with John Small coming in and doing very well.

McCaffrey is obviously a very talented player, but he will have a difficult job on his hands to regain his starting spot.

Dublin will be missing a few players this week, but they will still field an experienced side, and it will be a huge test of Rory Gallagher’s young guns.

Donegal got two crucial points from their last game down in Roscommon, and that is important.

It will still be a tough task to stay up in Division 1, but that win gives them a decent chance.

Dublin bring an impressive unbeaten streak to Ballybofey, but Donegal have got a proud record of their own.

They haven’t been beaten in a league or championship game in MacCumhaill Park since 2010, and it has been a great hunting ground for us in recent times.

The Donegal players are proud of that record, and they won’t want to see if go this Sunday.

Dublin brought a lot of supporters to Cavan a couple of weeks ago, and while they won’t have the same numbers in Ballybofey, there will still be a good atmosphere around the town and there will be a real championship feel about the day.

It’s very difficult to see us getting anything from the game, but I would like to see a promising display.

We need to tighten up defensively from the Roscommon game, and hopefully we can make life as tough as possible for the All-Ireland champions in MacCumhaill Park.

Another one of our stalwarts has moved on with Neil Gallagher announcing his intercounty retirement this week.

The news didn’t come as a huge surprise to me because I know he has struggled badly with injuries over the last 12 months.

He did brilliantly to come back and win another senior championship title with Glenswilly last October, but he was playing through the pain barrier.

Big Neil was inspirational as Glenswilly defeated Kilcar, but that was nothing new as we grew accustomed to seeing him lead from the front in recent years both with his club and Donegal. 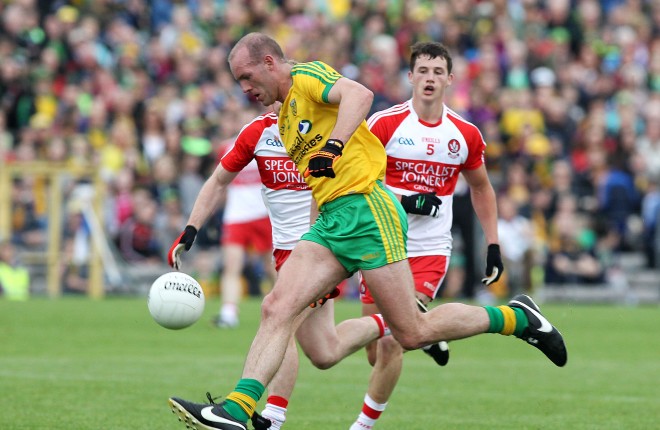 It wasn’t all plain sailing for Neil during his time with the county.

Some managers were reluctant to pick him, but it just goes to show that with perseverance and the right attitude, you can go a long way.

He wanted to play for Donegal, and he wanted to have success, and he eventually got there, and leaves the intercounty scene with every medal of note in his back pocket.

Big Neil captained the county to league success in 2007, which when things weren’t going so well, was a significant victory.

He found it difficult to break into Jim McGuinness’ plans initially, but he soon earned his spot, and his performances in 2012, most notably in the second half against Kerry, and in the semi against Cork, were outstanding.

The midfielder was also to the fore as Donegal reached the All-Ireland Final in 2014, and it’s just a pity that he couldn’t get another Celtic Cross.

I’m sure that defeat to Kerry will be a regret, but big Neil can be very happy with his innings.

There’s no doubt that he will be very hard to replace in the middle of the field.

We know that because when he was out injured over the last couple of seasons, we didn’t have any player to fill his boots.

He didn’t play any championship football in 2016, and there is an argument that Donegal would have collected the Anglo Celt Cup last season if Neil had been on the field for the closing stages against Tyrone.

Is he the greatest midfielder that we have ever produced? He’s definitely in the running alongside my old teammate Anthony Molloy.

To me, there were always similarities between big Neil and Molloy, and I felt they were both under-rated nationally.

They were both imposing figures, who could field, tackle and dominate a match. We were fortunate to see both men wear the green and gold.

Big Neil was a wonderful servant to Donegal and I wish him all the best for the future.

He got his rewards for his commitment to Donegal’s cause over the last 12 years, and I’m sure he’ll be hoping to continue to tog out for Glenswilly and win a few more medals before he hangs up his boots for good.

My picks this week are Tyrone, Wexford, Galway, Kerry and Cork all to win and that will come in at around 4/1

Most of those teams have started the year reasonably well, with the possible exception of Cork.

They host Fermanagh this weekend, and while my friends in the Erne county might not like it, I can’t see them getting anything down on Leeside.