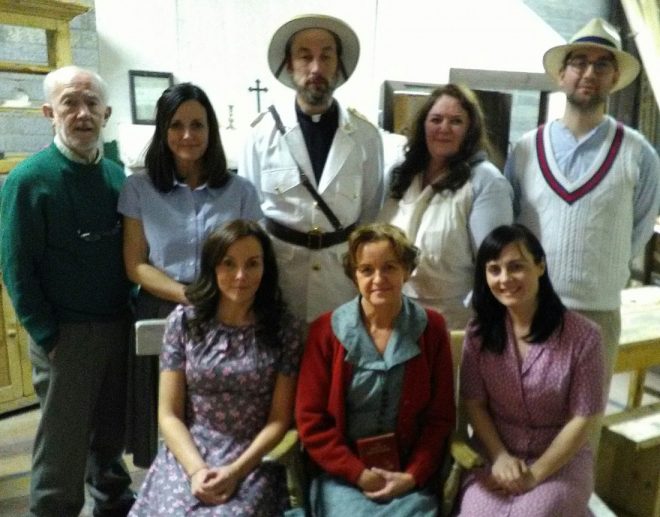 The cast of Dancing at Lughnasa.

THE award-winning Butt Drama Circle will bring the Brian Friel classic ‘Dancing At Lughnasa’ back to the stage of the Balor Theatre this week.

The opening performance took place on Friday night at the Market Hall Community Centre in Glenties, not far from the final resting place of the internationally renowned playwright who passed away in October 2015.

That homecoming of sorts will be followed by a four night run this week, starting from Wednesday February 22 to Saturday 25th, at The Balor.

Set in pre-electrification Donegal during the Celtic harvest festival of Lughnasa, Friel’s masterpiece tells the story of the five Mundy sisters and their brother, Fr Jack (JC Bonar), who has returned home from the missions after 25 years.

A ‘memory play, it is said to be loosely based on the lives of Friel’s mother and aunts who lived in Glenties.

Dancing at Lughnasa is the Butt Drama Circle entry in the 2017 All Ireland Open Drama Festival, with a further seven performances lined up after the Glenties and Ballybofey shows.

It’s the second year in a row the group has chosen to perform a Friel play.

Last year’s production of Translations enjoyed a great reception from audiences, just narrowly missing out on qualifying for the All Ireland finals in Athlone.

You will have a chance to see Dancing With Lughnasa from Wednesday night to Saturday February at The Balor, starting at 8pm nightly. Tickets priced €12 (€10 concession) are available from The Balor Box Office on 0749131840 or online at www.balorartscentre.com