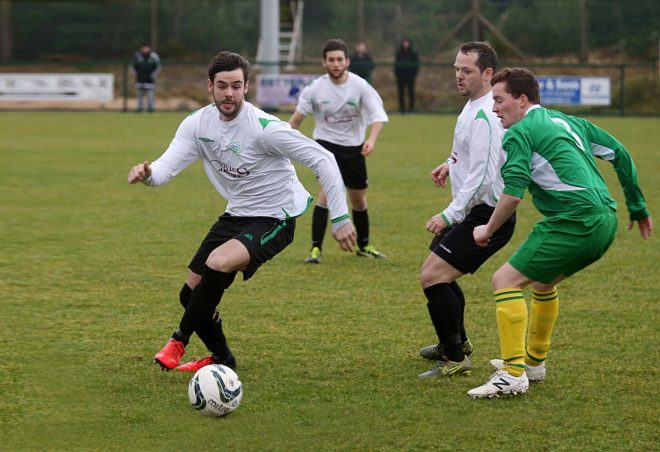 Odhran MacNiallais in action during Gweedore Celtic’s 3-1 win over local rivals Gweedore United at An Screaban on Sunday afternoon.

THERE was an All-Ireland winner, All-Ireland runner-up and All-Star battling it our for local bragging rights in Gweedore this afternoon.
Meanwhile, four players saw red as the Donegal Youth League game between Drumkeen United and Keadue Rovers was abandoned on Saturday afternoon.
Elsewhere, current All-Star Ryan McHugh scored a late, late winning goal at MacCumhaill Park on Sunday afternoon.
Unfortunately though, for Donegal supporters at least, he was wearing the colours of his College UUJ who defeated a very young Donegal fifteen in the opening round of this year’s McKenna Cup.
The Donegal News had reporters at all three games while there’s a full round-up of the other Donegal Youth League and Donegal League games together with the Letterkenny AC New Year Fun Run, Presentation nights for Glenswilly and Milford GAA clubs and much more in Monday’s edition of the Donegal News…