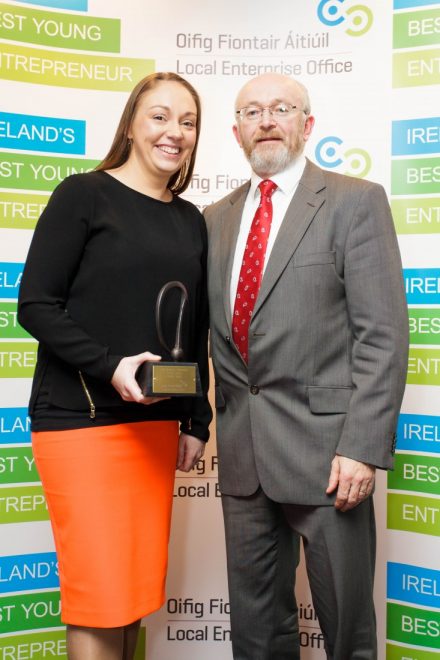 Gillian Doyle who won the Regional Final of Ireland’s Best Young Entrepreneur, pictured with Head of Enterprise in Donegal, Michael Tunney after she received her prize.

Portnoo-based businesswoman Gillian Doyle was the toast of the business world in Donegal at the weekend after she scooped the Regional Award for Best Business Idea at the regional finals of Ireland’s Best Young Entrepreneur (IBYE) competition in Sligo.
The award means that Gillian will now go on to represent Donegal at the National IBYE Finals in March where she will compete in the Google Headquarters in Dublin for the title of Ireland’s Best Young Entrepreneur.
Gillian qualified for the competition when she won the ‘Best New Idea’ category in the Donegal IBYE finals in November.
She was joined at Thursday night’s Regional Finals in Sligo by Rebecca Fleury of Smart Steps (Convoy) who was awarded ‘Best Business Start-Up’ at the Donegal finals in November and Brendan Toner of Audit International, (Letterkenny) who had won the Donegal category for Best Established Business and the overall Donegal award.
Gillian’s company Cerebreon Technologies, specialise in high-end data analytics and business management systems.
They provide intelligent software that will help save time and money in the personal insolvency sector.
Speaking after Thursday night’s final she said she was thrilled to have won and was looking forward to representing Donegal in the national finals.
“In all honesty, I really was shell-shocked to win the Regional Final. Since the Donegal final in November it has been all go, there was a stage where I had been in 9 countries in 7 days, so just getting back to the competition was all a bit of a whirlwind. I was driving home on Thursday night and said to myself – did that just really happen?”
Gillian, who is originally from Kildare, insisted that Portnoo was the perfect place to establish and grow the business and said she has been truly amazed by the level of support she has received.
“I’m not talking about grants or financial assistance, it is the support, the advice, learning and mentoring. It has been nothing short of phenomenal. The Local Enterprise Office and Enterprise Ireland have been so supportive and so helpful.”
Meanwhile, Head of Enterprise in Donegal, Michael Tunney, said it was fantastic for the county to have another business competing in the national finals.
“Since the IBYE competition started, businesses coming through the competition in Donegal have performed at a consistently high level. The contest is a springboard for young entrepreneurs who want to start or expand their business and we are very pleased with the spirit of entrepreneurship in the county among our young people,” he said.