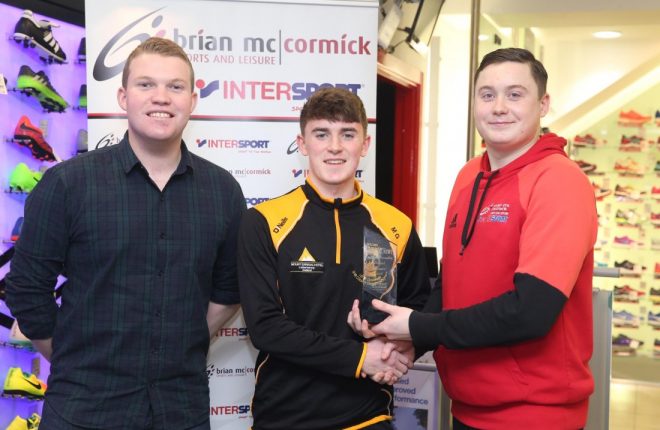 ST EUNAN’S became only the second team from Donegal to lift the prestigious Paul McGirr title when they defeated St Paul’s Warrenpoint in the decider back in December.

Any triumph at provincial level is an excellent achievement, but it was the manner of St Eunan’s victory that really caught the eye.

They eased to wins at the quarter-final and semi-final stage, but were expecting a stern test against the Down champions in the final in Dromore.

However, Pauric Ryan’s team produced another stunning performance to pick up the trophy and join Four Masters on the roll-of-honour.

The corner-forward produced a scintillating performance, scoring 3-2 from play, and he deservedly picked up the man-of-the-match award.

The St Eunan’s College student has had to free up some more space on his mantlepiece this week as he has also been selected as the Donegal News Sports Star of the month for December.

“It was brilliant to cap off a long year by winning an Ulster title,” said Gallagher last week, as he collected his award at Brian McCormick Sports & Leisure.

“We began training back in January, and the start of the league was moved forward then until June, but we kept training away.

“We worked hard and it was nice to get the rewards at the end of the year.”

St Eunan’s success didn’t just come overnight and they have been working under the tutelage of Pauric Ryan and PJ Kelly for eight years, developing their skills and learning the game.

That has created a bond among the team which Gallagher believes was key to their fine season.

“We would have all started playing gaelic at the same time when we were eight or nine.

“Pauric has been our manager since back then, and it’s great to come up with the same group of boys and win something.

“We’re all great friends and I think that makes it easier because we’ll all work hard for one another. There’s no bust-ups or any drama.”

Gallagher and his teammates performed well when they first started playing together, and were victorious at underage tournaments throughout Ulster.

However as the team entered their teenage years they encountered a problem – they weren’t growing as fast as other sides.

“We were always a wee bit smaller than most other teams. But this year we kind of caught up and got a bit bigger and we won everything that we could win.”

The first win came in the Under 16 Northern League Final against Naomh Padraig, Muff, and they went on to capture the County League crown, but not after Killybegs had given them a scare.

Gallagher said: “Once we won the first cup, we knew we could keep winning because we had played everyone by that stage and knew what they were like.

“We grew with confidence as the year went on, and it definitely was a big boost to get the first trophy.”

The team that had really held the upper hand on them were Sean MacCumhaill’s.

It was the Twin Towns side who won the Under 13 and Under 14 county championships at that age group, but St Eunan’s were determined to get the better of them this season.

They did exactly that, beating their rivals in both the Northern Board and County Championship Finals, and they headed up to Dromore to represent Donegal in the Paul McGirr tournament in fine fettle.

“That gave us a real confidence boost because we hadn’t beaten them in two or three years.

“But this year in the Donegal championship, we really got on top of them, and managed to beat them twice.

“We went up to Dromore with a lot of confidence after that and we didn’t fear anyone. It turned out to be a wee bit easier than we thought it would be.”

St Eunan’s hammered Derrygonnelly Harps and O’Donovan Rossa, Magherafelt on their way to the final of the Paul McGirr tournament.

The Cathedral Town outfit were much the better team in the first half of the final against Warrenpoint, but a late goal meant there was only four points between the sides at the break.

However, St Eunan’s annihilated their opponents after the interval scoring five goals, with the elusive Gallagher helping himself to three of them.

“It was brilliant to score a hat-trick, but it was a really good team performance.

“We were all playing well and we just went out and blitzed them in the second half.

“Our forwards got a lot of praise, but our defence was really solid all year.

“They might not get the big scores in the finals but you need to have 15 players who are going to give it their all out on the pitch.

“We work hard for each other and we have a great team spirit and I think that shone through.”

Gallagher certainly left his mark on the under 16 grade, but he is overage in 2017.

The majority of the St Eunan’s team will move on to minor football in 2017, and they will be hoping to progress even more next year.

“I move up to minor now and I think there’s going to be an under 17 league too, so we’ll be looking to give that a rattle as well.

“It will be hard to top last year, but we can just give it our best and see where that takes us.”