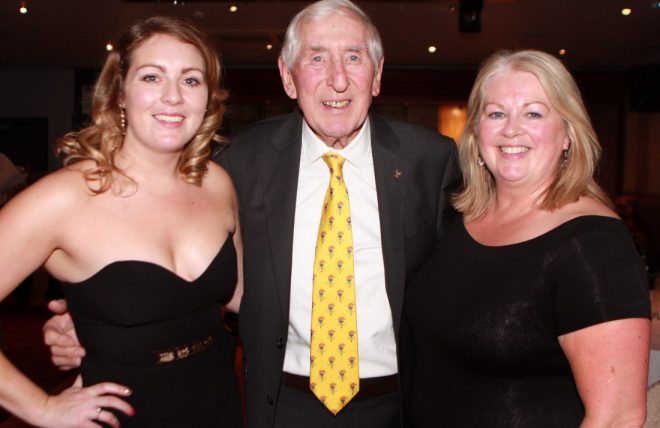 LETTERKENNY’S Teresa McDaid will start the New Year by coaching Team Europe at Saturday’s Great Edinburgh Cross-Country at Holyrood Park.
Team Europe will take on squads from Great Britain and the USA over four races – a senior men’s 8km, senior women’s 6km, junior men’s 6km and junior women’s 4km.
A member of the Irish Cross Country management team since 1999, Teresa led the women’s senior squad to the gold medal for the first time in their history in Budapest back in 2012.
Although Teresa has long been regarded as one of the top coaches on the International athletics stage, there was still a visible bounce in her step this week.
“I’m a wee bit excited alright. While I really love what I’m doing it’s always nice to be appreciated and I was delighted to get this news during the week. It’s totally unexpected but I didn’t ask too many questions,” she laughed.
Teresa flies out to Edinburgh today, Friday, and will meet the European team athletes this evening ahead of tomorrow’s race.
One familiar face will be Fionnuala McCormack, who successfully defended her individual title in Budapest back in 2012.
McCormack, who has two wins and three seconds in this race to her name, will join a squad that includes Karoline Grovdal of Norway as well as Yasemin Can and Meryem Akda, first and second at the European Cross-Country Championships for Turkey last month, and Romanian sensation Ancuta Bobocel.
Running for Britain are Steph Twell and Gemma Steel and they are joined by two-time double Olympic champion Mo Farah, who finished second in this race last year behind the American Garreth Heath. They will take on European champion Ali Kaya and his Turkish team-mate Polat Kemboi Arikan.
“I’m very grateful to athletics which, as a sport, has provided me with a life-time of opportunities,” she said.
National Athletics’ coach of the year in 2011 and 2012, Teresa continues to work as a coach with her home town club, Letterkenny AC. On Tuesday night she was back on the Danny McDaid track working with the local athletes.
Teresa has taken on an exciting new crop of teenage athletes having previously worked with a batch of middle-distance runners who have all made waves on the international stage – including Olympian Mark English, Darren McBrearty, Ruairi Finnegan and Danny Mooney.
“I’ve a young kid running with the Irish team in Antrim, while Donal Farren will be representing Ulster and Northern Ireland in Cardiff,” she said.
Farren, a student in St Eunan’s College, is joined by Matthew Johnston, Eoin Hughes, Enda McBride and Rayn Maguella while Omagh athlete Sean Corry also travels to Letterkenny to train.
“It’s always exciting when a talented group of young athletes come together. There’s a certain energy within the group which is giving them all a lift,” she explained.
Darren McBrearty, a semi-finalist in the 800m at the 2011 European Indoor Championships in Paris is also back at home and has re-joined LAC.
“At the minute he’s still trying to get himself fit and we’ll see where he goes from there,” she said.
Of more immediate concern however is Holyrood Park and coaching Team Europe at Saturday’s Great Edinburgh Cross-Country.
“It’s a nice challenge. I know the course well – which will be a help – but I don’t know the athletes and they don’t know me. If it doesn’t challenge you, it doesn’t change you I suppose,” she said.
In 2010, she left the stability of employment with the HSE to pursue coaching.
“It was a chance to go and follow my dream and, thankfully, I’ve had so many opportunities in terms of working with world class coaching. It’s been a good career choice – so far at least,” she smiled.