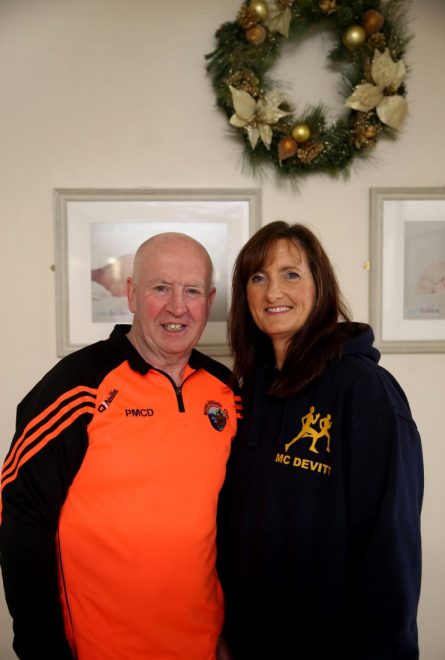 PACKIE and Sadie McDevitt of Cruckakeehan, Annagry, ran a combined total of 320 miles last year to raise money for the Neo Natal Unit at Letterkenny University Hospital and the Lake House Nursing Home, Portnablagh.
Earlier this week the couple, who raised the money by running twelve half-marathons, travelled to Letterkenny to present a cheque for €4,263.73 to the staff of the Neo Natal Unit.
“Our grandson Lorcan was born ten weeks premature in 2014 and the staff at the unit provided exceptional care to both baby and parents – our son Alan and his wife Claire.
“We watched the unbelievable care and attention that they gave Lorcan at that time and we decided to try and do something to raise funds and awareness of the great facility,” Packie said.
Members of the local Rosses Athletic Club, the couple took part in the local 5k circuit but they decided to test themselves over the longer distance.
“We began in March with our first half marathon in Omagh and finished our twelfth in Galway in October, raising €5,163.73,” he said.
Sadie works in the Lake House and they were trying to raise funds to buy a special chair so the couple purchased the chair and gave the balance to the Neo Natal Unit.
“We would like to thank family, friends, runners and supporters for raising funds for us throughout the year and we would sincerely like to thank the Rosses AC (Gaoth Dobhair ag rith le cheile) for organising an 8k which raised €720 and Teach Jack for providing the venue. Thank you all so much,” Packie said.