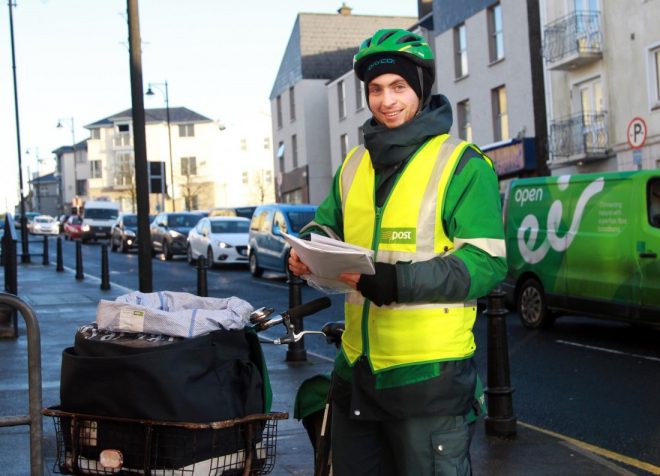 WELL in excess of one million items of mail will have passed through An Post, Letterkenny, in the weeks before Christmas. Last week alone, postmen from the Letterkenny area delivered more than 300,000 items.
December is traditionally their busiest month of the year and An Post is charged with ensuring that each and every item posted reaches its intended destination before Santa arrives on Christmas Eve night.
Christmas mail will be delivered right up to today, Friday, before staff get the opportunity to partake in the holiday spirit themselves.
Mr Paul Herrity, Delivery Services Manager with An Post, said that they had noticed a considerable increase in the number of people shopping on the internet this Christmas.
“It seems to be a growing trend with phones, clothes, shows, jewellery and various other fashion accessories purchased via the web. They’re coming to us in packages of all shapes and sizes – some are very lightweight while other packages can weigh up to as much as two kilos,” he said.
An Post has three Head Offices servicing Donegal – at Lifford, Donegal Town and Letterkenny which, located on the Business Park Road, Ballyraine, is the busiest.
“The volume of parcels continues to rise year on year and while the number of Christmas cards is down slightly this year they’re still very popular in more rural areas,” Mr Herrity said.
“Friday is the last post before Christmas and we’re not back until December 29. It’s a great team effort all year and I would like to take the opportunity to thank all members of staff for their help and co-operation throughout the year,” he said.
There is a staff of sixty employed in Ballyraine, including ten duties which have been taken into Letterkenny from Milford, Kerrykeel, Carrigart and Creeslough this year.
“These runs are all now based in Letterkenny which means that rather than having to wait for the mail to reach them after its been sorted here they’re able to get working on their own mail an hour and a half earlier in the day. This allows customers in those areas to get their post that little bit earlier every day,” he said.
Some semblance of normality should be restored to An Post services in the New Year in the build up to the next big day on the Postman’s calendar, St. Valentine’s Day, February 14th, followed by St. Patrick’s Day.