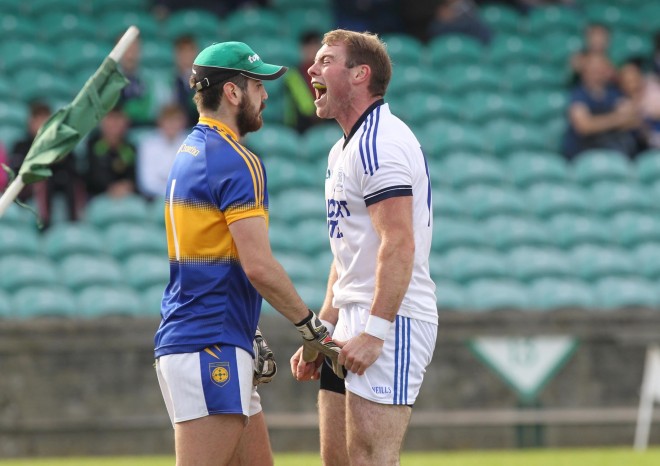 THE curtain comes down on the 2016 All County Football League season this weekend, with matches scheduled on both Saturday and Sunday afternoon.
The big game is the meeting between Naomh Conaill and Kilcar in Davy Brennan Park, Glenties, on Sunday afternoon – throw-in 3pm – with the winner being crowned 2016 Division One League champions. Should Naomh Conaill prevail, it will be a third title at this level while Kilcar are attempting to secure only their second Division One success since 1987. Yet, you get the feeling both teams would prefer to be anywhere else than on a pitch in Glenties on the first Sunday of November.
It reminds me of a comment from St Eunan’s veteran midfielder John Haran after they last won the league title in 2013.
“Nobody remembered who won the league last year, yet they all remember that ‘Eunan’s were knocked out of the Championship at the quarter final stages to Malin,” he said at the time.
In sport, the most difficult thing is to be consistent at the top level – which is reflected in the final league standings – yet Championship football is where it’s at for club GAA players. ‘Eunan’s would go on to beat Glenswilly in the 2014 Donegal Senior football Championship, the same year that Kilcar were winning their first league title since 1987. Fast forward two years and Glenswilly are back in the winners enclosure – beating Kilcar to win a third Donegal Senior football Championship since 2011.
A few weeks earlier the men from Towney had knocked out last year’s champions, and the bookies favourites, Naomh Conaill, in the semi-final. Last week, Glenswilly bowed out of the Ulster Club Championship, but not before preserving their top flight status with a derby win over Termon a week earlier. Club players, idle for most of the summer, welcomed back their two county men Michael Murphy and Neil Gallagher in time for championship action and Dr Maguire is back in the Glen over the winter.
The words of assistant manager, Gary McDaid, in the minutes after their final win over Kilcar struck a chord this week.
“We’re not too worried about the league. Don’t get me wrong, we want to be playing in Division One but we’re a Championship team.”
There’s little doubt that Kilcar and Naomh Conaill have been the two most consistent teams all year, yet neither managed to claim the ultimate prize – the Donegal Senior football Championship.
“It’s what is left on the table and we may as well go for it. At the end of the day it’s not that easily won, as once teams are knocked out of the championship it’s hard to maintain form while there’s always a few games at the end of the year where teams fighting against relegation have a lot more to play for,” Naomh Conaill assistant manager Martin Doherty said.
Following their semi-final defeat at the hands of Kilcar, he admitted that it had been difficult to lift the players.
“We played Dungloe straight after and it was a matter of getting a team out to fulfil the fixture, while we also struggled against Bundoran in our last game, but it’s the same for both teams. We both had out eyes set on winning the championship,” he said.
But, Doherty can remember a time when Naomh Conaill won their first ever Division One League title (2002) and he believes that that success acted as a springboard.
“I can still remember that it was a huge achievement when we won our first league title and we followed that up with a first ever championship, three years later. If you can’t win the championship, then the league is the next best thing and we’ll be trying to finish the season off with a bit of a flourish on Sunday,” he said.
Will the word ‘revenge’ feature strongly in pre-match dressing room conversations?
“The semi final performance and result was disappointing. We went toe-to-toe with them (Kilcar) that afternoon. You wouldn’t class them as a defensive team and we’re not a defensive team so the result was a good, open game of football.
“I suppose Glenswilly did their homework following that game and it paid off to their advantage in the final. We’ll have to look at a few things ourselves from the Kilcar game and try to ensure that we’re better prepared this time around.”
Seamus Corcoran suffered a serious cruciate ligament injury in the semi final and is definitely out this weekend while Daragh Gallagher (calf), Marty Boyle, Ciaran Thompson (ankle) and Leo McLoone (calf) all face late fitness tests.
“It will be the same for both teams who probably won’t be at their fittest on Sunday. Still, I think it will be a good enough game and hopefully a fitting end to the season – it will be for one team anyway,” he concluded.
Kilcar bounced back from losing the final with a comfortable win against Ardara, a result which relegated their opponents.
Eleven of the team which started against Glenswilly also played in that game and team manager Martin McHugh is likely to put out his strongest available 15 on Sunday. A second league title in three years would help to re-enforce belief around Towney that Kilcar are on the right track. After all, winning is a good habit.