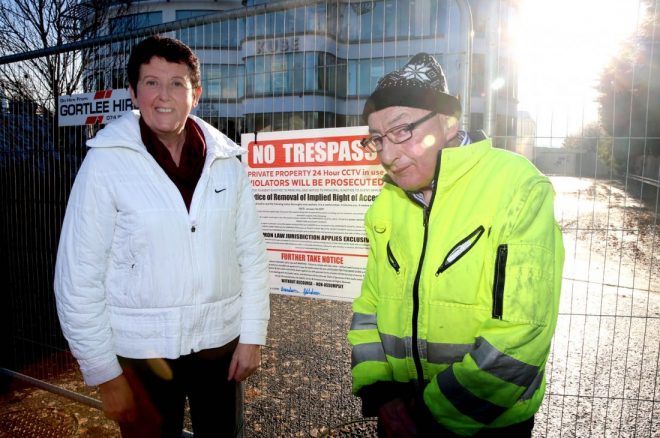 Brendan Gildea and his wife Tessie outside the disputed ‘Kube’ building. Pic by Declan Doherty.

A number of people who took over Donegal County Council’s water testing laboratory office a week ago are threatening to dump hazardous chemicals used for testing purposes, the High Court has been told.

According to The Irish Times, the High Court was told that the group of about 20 stormed the Kube building in Letterkenny last Friday (November 18th) and took over the second floor, which houses offices of Donegal County Council, including its water control section and laboratory.

They are threatening to remove all of the council property, including acids and a number of irritants stored there, and put them into a skip today, Friday.

The group includes a Letterkenny businessman, Brendan Gildea, who claims he is the owner of the building and wants the council to sign a new lease with him.

Control of the building has been given to a receiver, Martin Ferris, appointed by Danske Bank, to take control of Mr Gildea’s assets arising out of the failure of the firm, Brendan Gildea Ltd, to repay millions in debts to Danske.

However, Mr Gildea and a group of people had last Friday told staff in the council offices they were going to change the locks and tried to distribute what they claimed were legal notices to the staff.

In an affidavit, Peadar McRory, a senior engineer with the council, said two gardaí arrived at the building and one said they could not act after being shown alleged lease documents by Mr Gildea and his group.

Gardaí asked the council officials to produce alternative documents and said they were only there to prevent a breach of the peace, Mr McRory said. The council documents were provided later to gardaí.

A man called Noel Devine threatened on Wednesday a skip would be brought in on Friday to dump all the council property, including the hazardous chemicals, unless an insurance policy was produced, he said.

The council has insurance and the group was told that, Mr McRory said.

Mr Justice Paul Gilligan granted John Gleeson SC an order requiring Mr Gildea and all with notice of the order to vacate the building immediately and hand back possession. He joined Noel Devine as a defendant.

The judge said he was satisfied to grant the orders, sought on a one-side only represented basis, having regard to the evidence, including from the receiver, to the effect the group was involved in a “parallel but wholly bogus legal system” where they issued demands and evicted tenants without any legal authority, he said.

The case comes back to court next week.