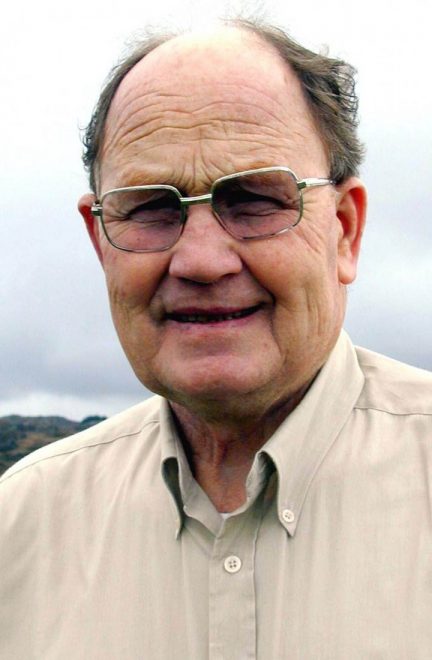 IRISH Olympian Pa Sharkey was laid to rest in his native Kincasslagh on Wednesday afternoon.
Pa (84), who represented Ireland in boxing at the 1956 Olympic Games in Melbourne, passed away on Monday morning at Letterkenny University Hospital following a long illness.
Requiem Mass was celebrated in St Mary’s Church, by Fr Pat Ward, PP Burtonport, assisted by Fr Nigel Gallagher, Chaplain, Rosses Community School, with burial afterwards in Kincasslagh cemetery.
In his homily, Fr Ward remembered a great character, a humble man, as well as a solid parishioner with strong faith.
“His mum died when Pa was fourteen and he helped his dad look after the family. He taught the girls to knit and darn and explained he had to learn these things early in life himself,” he said.
“He was more than just the headline boxing hero. He wore many hats at different times during his life – boxer, contractor, fisherman, family man. Rock steady, intelligent, humble, fun, he was a man of great charisma.”
The Parish Priest also referred to Pa’s quote to his family: ‘I never have felt better than any man, but neither have I felt any man was better than me’.
“He dealt well with life and, when disaster struck, he would soon look to the future. He always took the time to find the positive,” Fr Ward said.
Four gifts were brought to the altar at the start of Mass to signify things that were important to Pa. There was a family picture, representing his family values; a sextant to show his love of the sea; a theodolite to remember a time when he worked with his brothers in a construction company and a boxing medal.
Pa’s son James used a passage from Theodore Roosevelt as the reflection at the end of Mass.
“It is not the critic who counts; not the man who points out how the strong man stumbles, or where the doer of deeds could have done them better. The credit belongs to the man who is actually in the arena, whose face is marred by dust and sweat and blood; who strives valiantly; who errs, who comes short again and again, because there is no effort without error and shortcoming; but who does actually strive to do the deeds; who knows great enthusiasms, the great devotions; who spends himself in a worthy cause; who at the best knows in the end the triumph of high achievement, and who at the worst, if he fails, at least fails while daring greatly, so that his place shall never be with those cold and timid souls who neither know victory nor defeat”.
The late Pa Sharkey lost his first round fight to a third round knockout in the 1956 Olympics heavyweight division to the Swedish champion Thorner Ahsman. Winner of an Irish Junior championship in 1951 and a Scottish senior a few years later, Pa was living and working in Australia in 1956 at the time of the Olympics.
He was also a trustee of the Naomh Muire GAA Club, where his son in law Tom Marry is the current Chairman, while he played a leading role in developing the facilities at The Banks, Mullaghderg. He is survived by his wife, Margaret, sons James and Patrick, daughters Bridget, Margaret, Grace and Eileen, his sisters Mrs Anna Rodgers and Mrs Bernadette McCann (Scotland), grandchildren, nephews and nieces and a wide family circle.