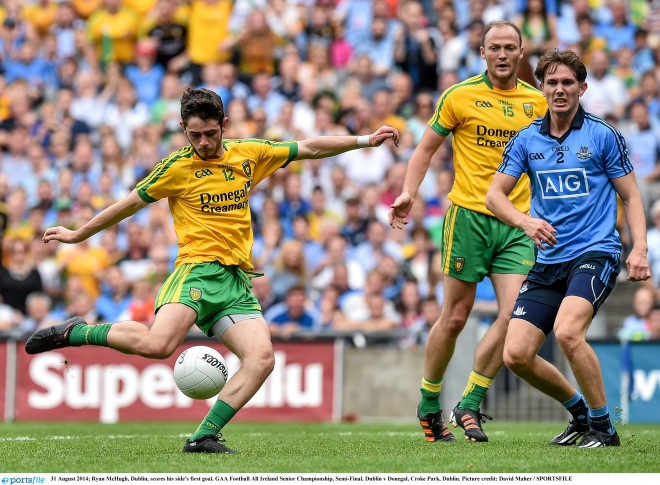 RYAN McHugh has been named in the 2016 GAA-GPA All-Star football team – the 32nd All-Star awarded to a Donegal player.
The Kilcar student, who has been handed the number 7 jersey, collected his first such award at Dublin’s Convention Centre last night, Friday, as part of the GAA GPA All-Stars ceremony.
Ryan (22) was in the library in Jordanstown on Thursday morning when he first heard the good news.
“I found out about like the rest of you – through social media – this morning. I was up early doing a group assignment when word came through,” he said.
A business student at the University of Ulster in Jordanstown (UUJ), Ryan follows in the footsteps of his older brother Mark (2012), father Martin (1983 and 1992), and uncle James (1992) in bringing an All-Star to the Towney club.
“It’s great for the family and for my mum (Patrice) and Rachel (sister) too. It’s great for the McHughs. We’re a proud footballing family. On a personal level, I’m delighted to get such an award at the end of what was a disappointing year for both Donegal and Kilcar. It gives you a wee lift,” he said.
With a crucial league game to be played in Glenties on Sunday afternoon, there won’t be too much time for celebrations tonight.
“Mum and dad will come up to the All Stars with me and dad will be driving back down home on Saturday morning as he’s the manager of the Kilcar senior team,” he said.
Kilcar will be attempting to win only their second Division One title since 1987, when they play Naomh Conaill at Davy Brennan Memorial Park on Sunday.
“It would be a nice way to end the season but it won’t be easy,” he said.
Ryan is one of eight first-time winners on the 2016 All Star team, joining David Clarke, Brendan Harrison, Jonny Cooper Peter Harte, Dean Rock, Michael Quinlivan and Paul Geaney.
The All-Star team includes six from All-Ireland champions Dublin and four from beaten finalists Mayo. There are two award winners from Ulster champions Tyrone with one player apiece from Donegal, Tipperary and Kerry.
2016 GAA/GPA All-Star Football Team of the Year: David Clarke (Mayo); Brendan Harrison (Mayo), Jonny Cooper (Dublin), Philly McMahon (Dublin); Lee Keegan (Mayo), Colm Boyle (Mayo), Ryan McHugh (Donegal); Brian Fenton (Dublin), Mattie Donnelly (Tyrone); Peter Harte (Tyrone), Diarmuid Connolly (Dublin), Ciaran Kilkenny (Dublin); Dean Rock (Dublin), Michael Quinlivan (Tipperary), Paul Geaney (Kerry)