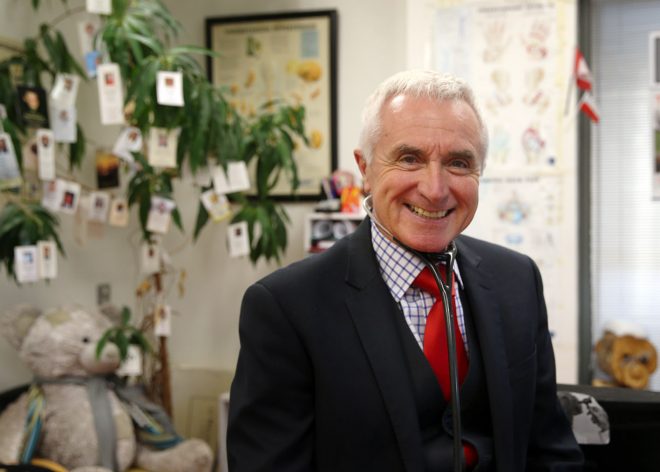 Dr. James McDaid pictured in his surgery this week.

“IT was like going through an operation without the anaesthetic”.
The words used by Dr James McDaid to describe his appointment as Minister of Defence only to withdraw from the post later the same day still strikes a chord today, twenty-five years on.
“I remember that day so well. I had only been in the Dáil a couple of years and Charlie Haughey called me into his office about 10pm. We had a two or three minute meeting during which he said that he was putting me in his new Cabinet. He told me that he was making me Minister for Defence the following morning but he asked me to say nothing and I kept the secret with me for the night.
“My mum, Bernard (McGlinchey) and a few other close friends travelled up to Dublin the following day but sure then everything blew up out of all proportion,” he said.
First elected in 1989, Dr McDaid was put on a fast track to the top of Fianna Fáil. However, his speedy appointment to Cabinet in November 1991 was taken from under his nose.
On the day of his appointment as Minister for Defence, Dr McDaid was pilloried as an IRA supporter after he helped Letterkenny man Jim Clarke’s appeal against extradition to the north. He was famously dubbed “a fellow traveller.”
On that fateful afternoon Fine Gael produced a photograph of him shoulder-to-shoulder and celebrating with Clarke, who had escaped from the Maze prison and was twice convicted in the Republic, outside the High Court. It took him six years to get another opportunity.
His subsequent five-year term as Minister for Sport and Tourism in Bertie Ahern’s first government was the high point of his career. He resigned from Fianna Fáil, and politics, in November 2010.
“They were difficult times. Some of the things which were being said about me – That I was a Provo and fellow traveller of the IRA – hurt. It was 1991 and we were in the height of the Troubles and it was quite frightening.
“I met Des O’Malley, Bobby Molloy and Mary Harney (from the PDs) while my family were on their way down form Donegal but the objections to my appointment were growing stronger and stronger. People were trying to get at Charlie Haughey through me and, eventually, at about 8.30pm I told Charlie that I felt it would be better if we just called it a day. That was basically that. He shook my hand and said that he hoped there would be another day for me,” Dr McDaid recalled.
He then proceeded to enter the Dáil chamber where he read out a prepared statement.
“I remember saying at the time that it was like going through an operation without the anaesthetic and that still stands today. My family were driving around Dublin looking for Buswells Hotel when they heard on the RTE News that I had resigned. It wasn’t nice,” he said.
“Afterwards I heard that the issue had been raised in the House of Commons while other friends heard about it on a flight home from Dallas. Others were delighted with the appointment of course but it just wasn’t to be at that time,” he added.
In later years Dr McDaid felt more shunned by Fianna Fáil. Indeed, when the party headquarters placed former Independent Fianna Fail Councillor Niall Blaney on the general election ticket with Dr McDaid and Cecilia Keaveney in 2007, the former minister felt the tactics were a bid to oust him.
“When I handed in my letter of resignation (November 2010) it was because I felt that the party should have gone to the country the previous September when it looked like we could have got fifty or sixty seats. Instead we ended up taking a hammering,” he said.
Today, Dr McDaid still follows Fianna Fáil politics but strictly ‘at arm’s length’.
“I’m glad that I stepped away when I did because, as happens in a lot of constituencies, you can stay in far too long. We have a young able man in Charlie McConalogue in place now and we still have a very good Fianna Fáil vote in Letterkenny and Donegal,” he said.
Less than twenty four hours earlier Donald Trump had been elected as the 45th President of the United States.
“I’m concerned with the way the elections went out there. A lot of people who voted for Trump never voted before. They are the disenfranchised and forgotten people.
“We’ve had Brexit this year and now Trump. People here are now voting in anti austerity and water charges candidates – all sorts of outrageous things – in a kick to the establishment.
“It remains to be seen how Brexit and Trump works out but I would be quite scared to be honest. In Europe, we’ve always been able to rely on America for help but now I wonder. What happens when Russia invades Ukraine or Lithuania? There’s a huge shift in global power. If America gives up its interest in Russia and other parts of the world.. it’s very dangerous,” he said.
Closer to home, Dr McDaid believes that there’s a natural coalition between Fianna Fáil and Fine Gael.
“The French are on their fourth or fifth republic while we’re still on our first – dating back to our Civil War politics days – but now it’s very much a case of right versus left with very little room in the middle and that’s while I feel that the natural coalition on the right is between Fianna Fáil and Fine Gael,” he said.
Both Jim Clarke and Dr McDaid are members of St Eunan’s GAA club.
“Jim’s a family man and has settled down. He’s very committed to the GAA and he’s always out there coaching the kids.
“Life is good. I’m glad that I went back to medicine. If I retired I would quickly get bored. I love medicine. I’ve no regrets,” he said. 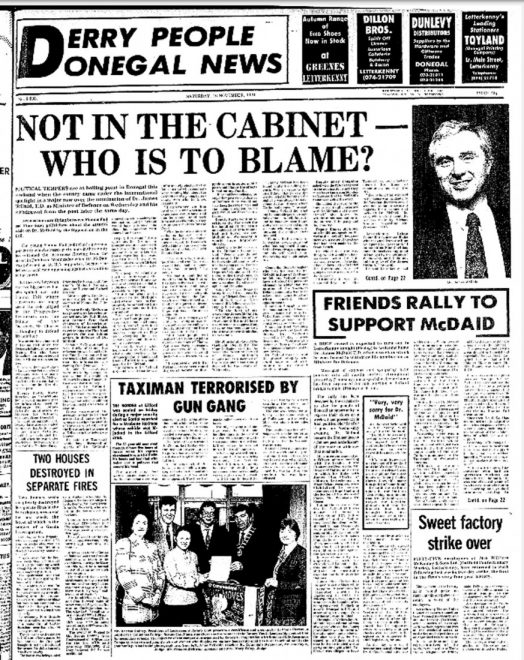 ‘NOT IN THE CABINET – WHO IS TO BLAME?