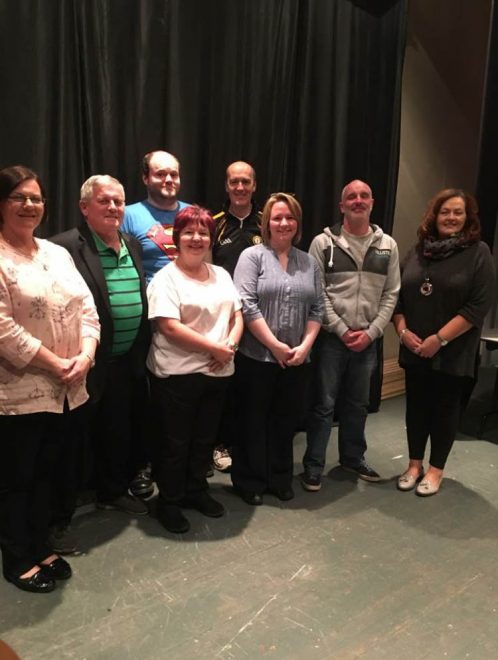 The cast of The Maiden Aunt.

CASTLEFINN Drama Group will present their production of the hilarious Jimmy Keary play ‘The Maiden Aunt’ in St Mary’s Hall this weekend.

It will be directed by Zara Holmes, who only last year revived the group, and who has a very talented cast at her disposal.

The final touches were this week being put to the play which will be performed on Saturday and Sunday nights, at 8:00 pm.

This time last year, they enjoyed enormous success with their production of ‘Separate Beds’, filling the hall on three successive nights.

This years play, The Maiden Aunt, is a comedy set in a farmhouse. Gertie O’Grady, a retired teacher and spinster, comes to stay with her niece, Mary Murphy, after a spell in hospital.

Mary tries to persuade her Aunt Gertie to make a will. When Gertie apparently ‘dies’, Mary’s husband, Dan comes up with an elaborate plan to get their hands on her money.

Needless to say Dan’s plan falls apart at the seams!

The three-act play starts at 8 pm sharp each night, and doors open at 7:30 pm so arrive early as it’s pay on door only. Tickets are priced at just €7 for adults €4 for children.

Please come along and support this wonderful group and enjoy their hilarious play.