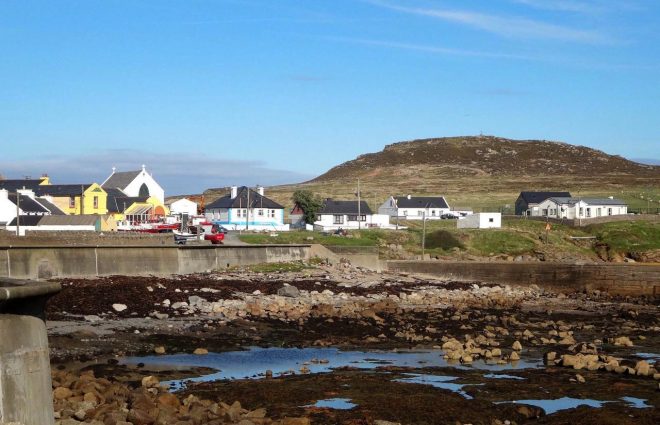 The Supreme Court has struck out an appeal taken by the company that formerly owned Tory Island’s hotel, against a High Court judgement.
At a hearing on Tuesday the judges ordered that County Down film-maker Neville Presho be immediately paid €46,000 in damages, which had already been lodged with the court as a condition of permitting the appeal.

The court also ordered the hotel company’s former owner, Tory islander Patrick Doohan, to lodge an affidavit explaining how a judgement mortgage in favour of Presho was cancelled from a folio in Land Registry, without Presho or his legal team being told: Why the court was not told the company was dissolved: Why Presho’s legal team, and not Doohan, brought this to the court’s attention.

The High Court awarded the damages in 2009, when it found Ostán Thoraigh Teoranta and Doohan were responsible for demolishing Presho’s house on Tory Island because it blocked the hotel’s view of the sea. First, the house was damaged by an unexplained fire. Then the walls were flattened by machinery.
That court heard dramatic evidence from Presho that he returned from New Zealand in 1993 and, as he approached Tory by ferry, saw that his house had disappeared to be replaced by a hotel car park. Two psychiatrists gave evidence saying this precipitated his decline into severe mental illness. At the time, the case attracted international publicity.

The court agreed to an application from Presho’s barrister, Cormac Ó Dúlacháin, instructed by solicitor Michael Gillespie, that the appeal by Ostán Thoraigh be struck out. “The Company does not exit and is not in a position to proceed with the appeal,” Judge Frank Clarke said, speaking on behalf of the three judges.

Mr Ó Dúlacháin made the application at the start of the hearing. He told the court the company, Ostán Thoraigh, had been dissolved on April 6. Its principal asset, the hotel on Tory Island, had been sold in December last. As a result of the High Court award, his client had registered a mortgage against the hotel. However, on the current folio in Land Registry “our judgement appears as cancelled.” He told the Court his client had received no notification the company was dissolved.

Séamas Ó Tuathail, barrister for Doohan, said this information came as a surprise to him.
“Mr Doohan wants to go ahead to clear his name,” he said. He initially said the company still owned the property, but accepted it did not when Ó Dúlacháin interjected and offered to show him the documentation.

The three judges adjourned the hearing for 30 minutes. On their return, Judge Clarke instructed that the €46,000 be paid to Presho, with his legal costs. He also expressed concern at the way the company had been dissolved.

“The court is concerned at the information brought to its attention today regarding the judgement mortgage obtained by Mr Presho,” the judge said.
There were three matters. The company ceased to own the hotel. A charge in favour of Ulster Bank on the folio was cancelled. On the same date “a judgement mortgage in favour of Mr Presho was cancelled. The court has been informed by counsel for Mr Presho that no notice was given to his side.”

The court ordered that, in order to proceed with his appeal, Mr Doohan would have to file his affidavit by December 6.