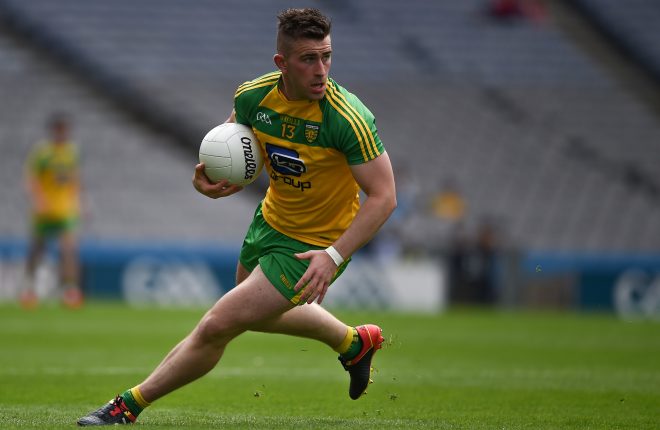 30 July 2016; Patrick McBrearty of Donegal during the GAA Football All-Ireland Senior Championship Round 4B match between Donegal and Cork at Croke Park in Dublin. Photo by Ray McManus/Sportsfile

Three Donegal players are among the list of nominees for this year’s GAA/GPA Opel football All Stars with Kilcar duo Patrick McBrearty and Ryan McHugh joined by Ardara’s Paddy McGrath.

The 45-strong list is dominated by All-Ireland finalists Dublin and Mayo, both of whom have 11 players each among the nominees and in all there are eight counties represented.

None of the Donegal players has previously received an All-Star, although McHugh has won the title of young footballer of the year.

McHugh and McGrath are listed among the 18 defenders nominated with the all-Ireland pairing of Dublin and Mayo taking 11 of those nomations between them.

McBrearty is among the list of 18 forwards nominated. That list is again dominated by nominations from Dublin (4) and Mayo (4) while the likes of Peter Harte, Sean Cavanagh and Niall Sludden from Tyrone also make the list.

Dublin’s Brian Fenton and Ciarán Kilkenny and Mayo’s Lee Keegan will battle it out for this year’s Player of the Year award, while the Young Player of the Year will be selected from Diarmuid O’Connor (Mayo) and Tipperary duo John Keane and Jimmy Feehan.

The All-Star team will be selected by a panel of national Gaelic Games Correspondents with the Players of the Year awards voted on by the players themselves before presentations take place at a special banquet in Dublin’s Convention Centre on Friday, November 4.