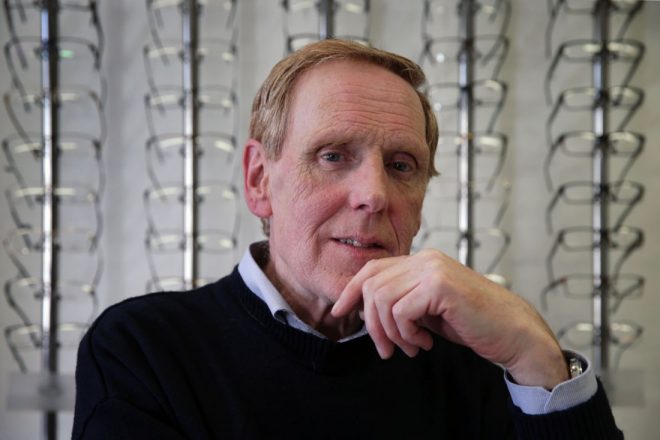 Ophthalmic optician David Ball who has retired from his practice at Main Street, Letterkenny.

THE end of an era in ophthalmology was quietly marked in Letterkenny last weekend when Mr David Ball, FAOI, retired from his practice after more than 46 years.
In that time, he has seen several generations of patients, and watched over dramatic changes to the industry and the town.
David is the youngest son of the late Cecil T. Ball, watchmaker and optician, who first established his business at 52 Main Street in 1928.
The Letterkenny man spent six months working in Thurles after graduating in 1969 before coming home the following year, taking over from his father who retired.
David retired last Saturday and his career has spanned technological development in ophthalmics he could hardly have envisioned when he entered it as a graduate.
Having helped thousands of local patients, David is now looking at using his eyes in a very different way in the years ahead.
“My dad was a pioneer in this field and when I took over in the early 70s there were just the two opticians in the town, Louis Walsh – who also took over from his father – and myself. Today, there are five opticians operating in Letterkenny,” he said.
David is now looking forward to spending more time with his family – and pursuing his hobbies of gardening and ‘tinkering’ with old cars and motorbikes.
“I have an old Mini Cooper as well as a 1939 Norton motorbike,” he said.
David believes the strength of the practice has been the family values he inherited from his father.
“He was one of the first opticians in Donegal. Before that people used to have to travel into Derry, or even as far away as Dublin, to get their eyes tested. He used to travel to Glenties once a month while he also developed a strong customer base in places as far away as Fanad,” he said.
Many of those customers remained loyal to David down through the years.
“Many of my patients I have been seeing for over 40 years. I have been looking after their children and grandchildren,” he said.
In that time enormous changes have happened in the profession. Long gone are the days when schoolchildren were given the option of pink or brown framed glasses – something which put many of them off wearing glasses for life.
“The developments in optical instrumentation have been amazing down the years while today, everything from appointments to records is computerised.
“The great satisfaction is being able to improve people’s sight and also spotting conditions in their early stages and preventing deterioration in their sight such as cataracts and glaucoma,” he said.
Reflecting back on those early years, David said that the instrumentation was very basic.
“When I started ninety nine per cent of lenses were glass and it had been the same for fifty years before that and the lenses themselves were thick. In the eighties technology improved, so much so that today 99.9 per cent of lenses are plastic,” he said.
When Mr Ball started out in business quite a number of families lived along Letterkenny’s Main Street but that has all changed too.
“Letterkenny has changed and mostly for the better, but I would like to see families back living in the heart of the town,” he said. 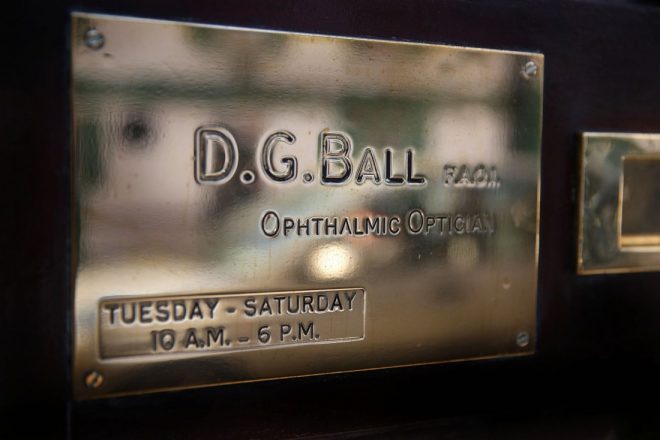 The brass plate on the Main Street practice of David Geoffrey Ball.