A LETTERKENNY man has raised almost €5,000 for Pieta House Northwest campaign by taking on the gruelling challenge of the Pacific Crest Trail, and being reunited with his girlfriend on the way.

Having decided to take a career break from An Garda Siochana, Michael Devlin, has spent the last year-and-a-half travelling around many far-flung and exotic destinations including China, Malaysia, Indonesia and the Philippines. However, it was a chance look at a ‘bucket list’ website that sealed his fate and would see him take on the four-month trail from Mexico to Canada, spanning almost three thousand miles.

Speaking to the Donegal News, Mr Devlin, who is now taking some well-deserved recuperation time, said he decided to undertake the tough challenge for a cause very close to his heart, raising, to date, nearly €5,000.

“My trek started on April 25 in California at the Mexico border in a small town called Campo. I finished in Manning Park, Canada, on August 31. It was 2,658 miles.
“I hiked in aid of Pieta House. It is a charity I and my family support. They are currently trying to set up a centre in the Northwest and I am hoping some of the funds I raised will go towards that. I’ve almost €5,000 raised so far.”

Despite his difficult challenge, Mr Devlin took time out every day to thank those who supported him and gave him donations through a ‘Facebook diary’ with a link to Pieta House charity.

Having come across details of how to sign up for the hike, Mr Devlin worked in Australia to save the money to take part in the hike. It wasn’t, however, the first time he had undertaken a mammoth task in aid of charity as in 2011 he took part in an expedition to Africa to climb Mount Kilimanjaro, in a trip that was organised by his father, Danny in conjunction with the International Police Association. The team of 11 raised an impressive €20,000 for three charities – lifeboats, cancer and the children’s hospital.

However, despite being a seasoned traveller, the 29-year-old told of how he had encountered some difficulties on the way. 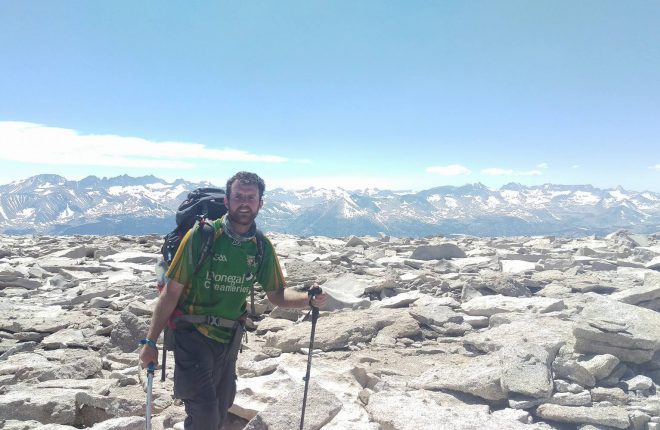 “For the first 100 miles I had very bad blisters and my feet bled. After that, they toughened up but my joints still hurt as I was doing almost 30 miles a day, with a backpack. At the start in the desert area there wasn’t as much water so I had to carry a lot. I had to watch for rattle snakes because if I got bit I was too far from the road and had no phone signal to call for help. I ran into a brown bear on the trail near the end but I think he was more scared of me!

“The hardest part was the Sierra area in California. I would wake up and there would be frost inside my tent. I camped most days at over 10,000 feet. The snow was very heavy. I got lost a lot and needed GPS to find the trail. I fell a lot too, but I teamed up with a group of army veterans to hike the toughest part. Foresters Pass is the highest part at 13,40 feet but we also hiked eight miles trail to summit MT Witney at over 14,000 feet, the highest mountain in the lower 48 states.”

Reflecting on his experience, Mr Devlin said the most memorable part of the trail for him was the stunning views twinned with the generosity of strangers.

His challenge and the worthy cause behind it even attracted the attention of a South Korean documentary crew.

“I started clean shaven and shaved for the first time in Canada. I did get a haircut after a restaurant owner came out and gave me fresh fruit, mistaking me for a homeless person.

“There are people who dedicate themselves to helping hikers. They are called trail angels, and the generosity they provide is known in hiker circles as trail magic.

“I have received a lot of donations on my fundraising page from people who struck up a conversation with me about the sign and Pieta House.

“A South Korean documentary film crew I encountered are following the story and have done several interviews with me
along the way.”

However, Mr Devlin paid the biggest tribute to his girlfriend, Danielle Lynch, from Buncrana.

“I finished my travels by flying to Iceland from Canada and meeting up with Danielle. She supported me all the way, writing letters, phone calls and new t-shirts. I first met her  this time last year before I went away. I met her a couple of weeks later in Thailand when she was on a holiday with her friends. I didn’t see her for the next year but we stayed in contact throughout my travels and we became really close and decided to meet somewhere at the end.

“I couldn’t have got through the hike without her, she was a great support.”

Anyone wishing to still make a donation to Mr Devlin can do so until October 1 by visiting http://give.everyday.hero.com/ie/hike4pieta 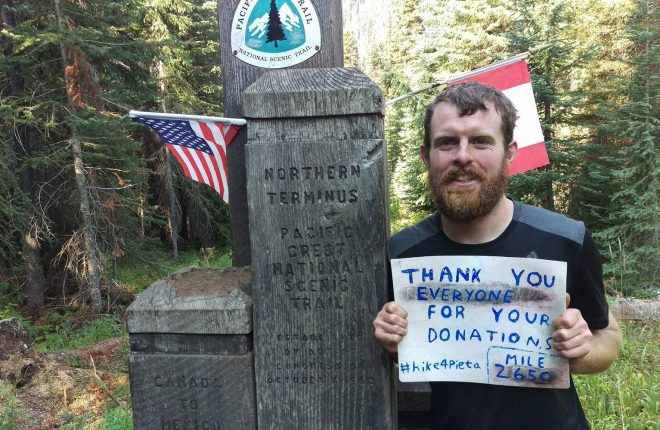 Letterkenny man, Michael Devlin, thanks everyone who made a donation to his ‘Hike4Pieta’ challenge.

Michael Devlin with his girlfriend, Danielle Lynch, in Iceland. 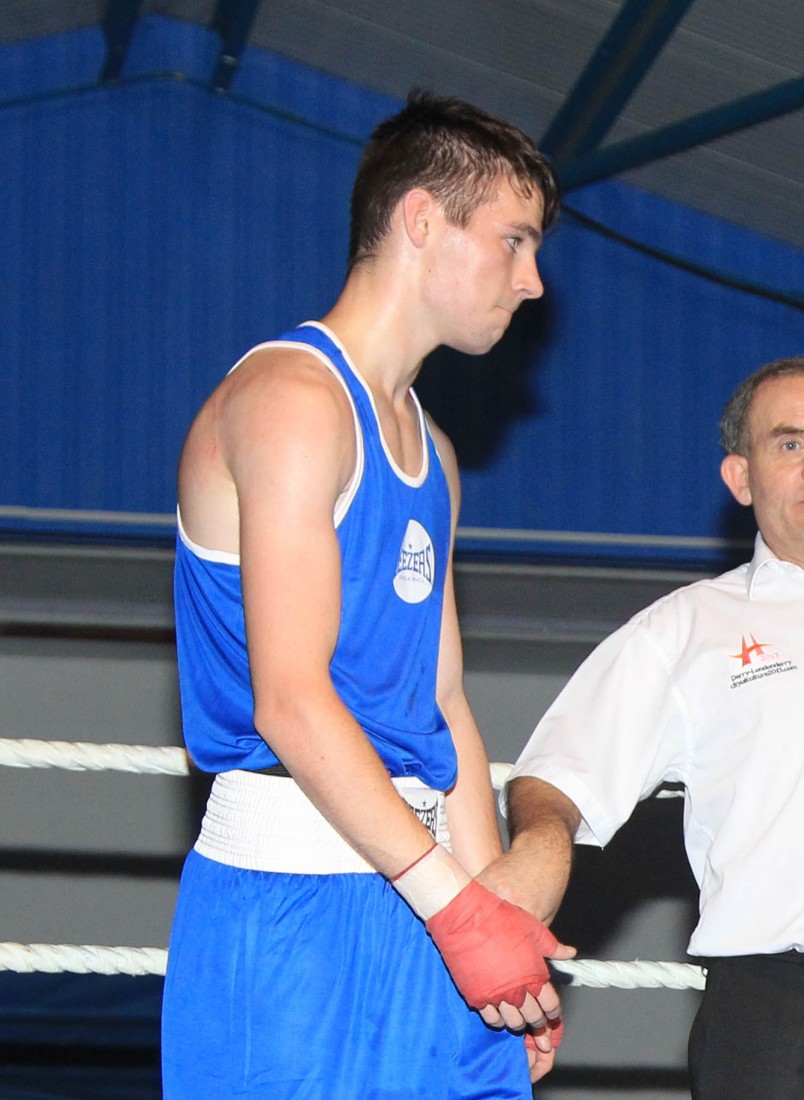 SIX Donegal boxers are in the semi-finals of the National Open Youth Championships, which take place tomorrow in Dublin’s...