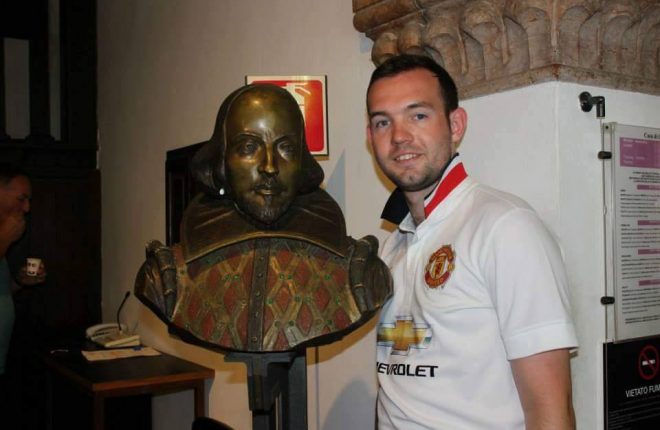 If you were throwing a party and you could invite anyone in the world, dead or alive, who would you ask around? Ryan Reynolds

Where do you like to go out to celebrate after a big victory? Teach Jack in Glassagh.

What’s the worst pitch you’ve ever played on? Finn Park back in my youth days I’d say!

Which character in any film are you most like? Probably Chandler from Friends.

Any odd items in your kit bag? I’m the only one who brings shower gel which must be odd for the rest of them.

Who’s the biggest joker in the team you play for? Frank McGee and Paul Doogan

Which team mate has the best looking other half? I’ve only eyes for one woman!

Who is the worst trainer? Pádraig Doyle McFadden – misses the first half hour which is always the worst.

Who spends most time in front of the mirror in the dressing room? John McFadden

Who’s the best/worst person to sit beside on the team bus? Hugh Martin Curran. Never a dull moment!

Who has the best and who has the worst diet on the team, and what does it include? I see the younger lads eating jaffa cakes and bananas at half time – I’ve never understood that.

Toughest opponent you have faced? I remember playing Cruz Azul from Mexico with the Ulster team back in the day. I haven’t got the centre half’s name but he must be playing Champions League football at this stage – unreal.

Best or worst quote you’ve heard, either from a manager, player, opponent? I remember Tom Coll saying “back to normal” when I scored a hat-trick in Keadue after a drought. I’ll never forget that! Our manager Brian Beag Gallagher always says before a match that there’s going to be 22 mistakes made on the pitch today, limit yours to one. (I normally do 22 myself)

Best manager you’ve ever played under? Ollie Horgan. Completely different at training compared to games. Learned a lot from him.

Best ever performance? Winning the treble with Glenea in the 2008 Youth League stands out as a team. Personally, it was scoring against all the other provinces and winning the All Ireland title with Ulster u17.

One to forget? Losing the Schools Ulster Semi against Virginia College. Our keeper made a howler and I’ve never let him forget it.

Sporting ambition? I think I’ve won every possible trophy in the Donegal Leagues but I’d love to win the Premier League again with Gaoth Dobhair Aontaithe.

When you were playing in the back garden, who did you pretend to be? Fernando Torres and Thierry Henry.

If you were in charge of transfers, who’d be in and who’d be out of the team? I’d take Paul Sweeney, Darren Mc Geever and Ryan Mc Fadden from Glenea. Probably bench Sweeney.