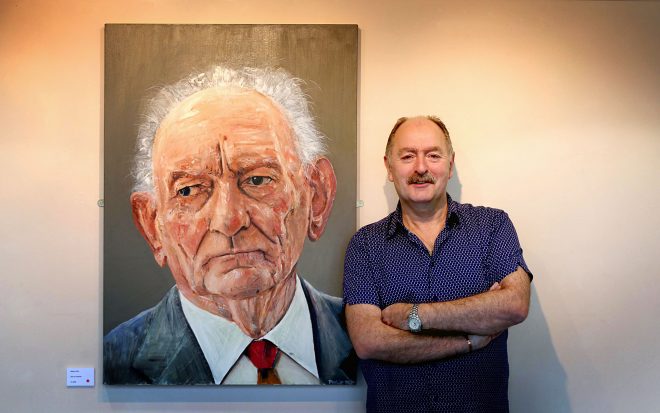 Philip Mackey beside his portrait of the late playwright Brian Friel.

IT’S taken a while but it’s been well worth the wait. The words of Philip Mackey strike as chord as he slowly walks through his exhibition ‘Face to Face’ made up of seventeen portraits which hang from the walls of An Grianán Theatre.
Philip (58) from Ard O’Donnell in Letterkenny has always been known as an artist to his family and close school friends.
However, the paints and easel were cast to one side as he pursued other interests after leaving St Eunan’s College in the 1970s.
“I was young and I was getting a fairly good wage in a local factory at the time so I abandoned the paintings but now I’m back doing what I know and love,” he said.
Philip’s first solo exhibition was officially opened by Denise Ferran, author, artist and President of the Royal Ulster Academy in An Grianán Theatre last Friday night.
Married to fellow ‘townie’ in Marette Crumlish, the couple have one son Ciaran.
Drumany, Bonagee, has been their home from more than thirty years and he’s still struggling to come to terms with the fact that he is head-lining a major solo exhibition in his home town.
“The last time I spoke in front of a crowd before last Friday night was when I was best man for my brother, Deace, which must have been over thirty five years ago and I’m still not recovered from that! And yet here I was standing in front of my family and friends – people I have known and respected for many, many years. It was a surreal moment. I really couldn’t have wished for more. It was beyond my wildest expectations,” he smiled.
This exhibition of portraits include a number of the town’s better known characters including Little John Nee (Philip’s schoolmate from St Eunan’s), fellow artist Peader McDaid and musician Hugo Blake as well as the late Brian Friel, professional boxer Jason Quigley, Tracey, a student from his days teaching at Art-Co in Letterkenny and Paschal Blake, the last Mayor of Letterkenny.
There’s also a self portrait – one of a series of three with a baseball cap – together with two portraits of men down on their luck from his days as a student at the North West College in Derry and another of Danny, a young man from Donegal Town.
“I work from photographs as, in the modern era, people wouldn’t have the time needed to sketch them,” he said.
“I’ve always been fascinated by people and the fact that no two people are the same – even identical twins. It intrigues me. It’s a kind of investigative kind of thing. We’ve all got our own personalities and I hope that I have managed to show that in my work,” he explained.
Even though he has been given some instruction in life-drawing, Philip is essentially a self-taught artist. Since about 2010 Philip’s work has been steadily gaining more recognition.
Most recently he has been the recipient of The Derek Hill Foundation Award having been selected as the overall winner at The Glebe Gallery Annual Easter Art Exhibition, 2016, where he showed both his Hugo Blake and Tracey paintings.
Patricia McBride, Director, An Grianán Theatre, was one of the judges and she subsequently asked him to put together an exhibition.
“I’ve seventeen pieces on exhibition, including new pieces while I’ve also called in stuff from other galleries as well as pieces that people have bought from me,” he said.
Where to from here?
“I’m going to push on with the portraiture because even though I’m not making a living from it good things are happening,” he said.
“It’s taken on a life of its own. If I was to stop painting tomorrow in a year’s time people walking down Letterkenny’s main street will be saying I wonder what he’s doing now,” she said.
In more recent decades Philip has been employed as an Heraldic Artist and Calligrapher with the Office of the Chief Herald of Ireland, (National Library of Ireland).
“I’ll continue with that work too – for the time-being at least – but I’ll definitely be giving a painting a little more time,” he said,
Philip’s portraits have been selected for exhibition with the Royal Ulster Academy Annual Exhibitions on four occasions; for the Royal Hibernian Annual Exhibitions on three occasions. In 2014 he was one of 12 artists from the island who were selected for the Dublin Heat of Sky Portrait Artist of the Year which was held in The Irish Museum of Modern Art. His portraits have been bought by private collectors, most notably Martin Gale RHA and by Dublin City University for their Contemporary Art Collection. 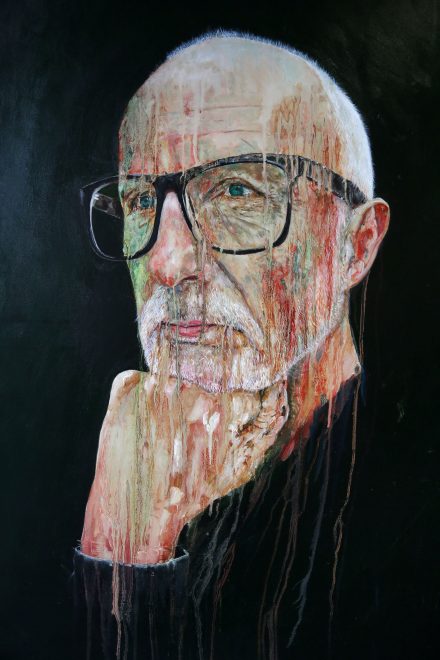