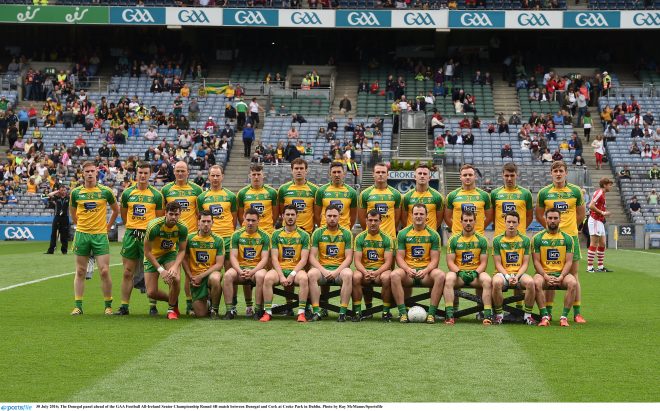 30 July 2016; The Donegal panel ahead of the GAA Football All-Ireland Senior Championship Round 4B match between Donegal and Cork at Croke Park in Dublin. Photo by Ray McManus/Sportsfile

THE Donegal County Board is one of the sporting groups behind an ambitious £6 million cross border sports complex development it has emerged.

The project, which is being spearheaded by City of Derry Rugby Club, would see their 32 acre ground at Judge’s Road being transformed into a state-of-the-art regional sports centre.

The new complex would include three outdoor pitches, including a 4g synthetic pitch and two grass pitches, an indoor arena, gym and cafe. An application for funding has already been made as part of the Peace IV Capital Shared Spaces Programme and, if successful, work could commence early next year.

“It’s being led out by the Rugby Club but we see the facility as being suitable for gaelic games when it’s up and running. It’s adjacent to Donegal and may well even prove to be an ideal location for preparing our County team,” Mr Dunnion said.

The centre will also incorporate a major indoor arena and its dimensions will allow for both indoor football and hurling.

“We would see it as being very beneficial for our clubs in Inishowen, in particular, and those in east Donegal,” Mr Dunnion said.

“The establishment of a regional centre for sport, wellbeing and excellence can only be a good thing for the whole North West. We’ve committed to lending our support through the initial planning phase. We’ll work closely with the promoters and explore all options as the project progresses,” he added.

Details of the plans were unveiled at a meeting of Derry City and Strabane’s Business and Culture committee last week where representatives of the club outlined their vision for the new facility, which they say would cost between £5m to £6m.

Club Chairman, Tom Frawley, said thew different disciplines the new centre wold cater for would secure the long term future of the Judge’s Road as ‘it was impossible to sustain the site on a single sport’.

He added that the new centre could also play a vital role in helping Ireland’s bid to host the Rugby World Cup in 2023.