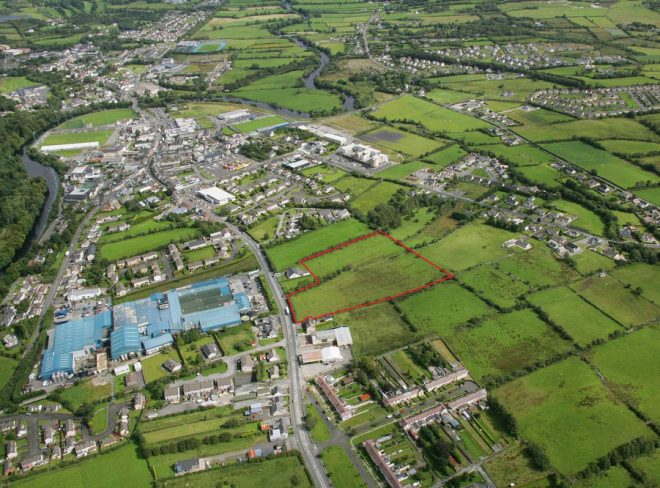 PLANS by retail giant Tesco to build a massive new store in Ballybofey appear to be dead in the water after their proposed site was recently sold.

In 2011, it was granted permission by Donegal County Council to build an ‘urban retail development’ on a six acre field opposite the P Mulrine factory at Donegal Road.

The proposed development, with a gross area of 46,381 square feet (4,309 square metres), was to include a food store and an off licence.

However, the council’s decision was successfully overturned on appeal to An Bord Pleanala (ABP).

This week, the Donegal News has learned that the struggling UK company has sold off the site it paid in the region of €3 million for at the height of the boom.

According the website of the selling agent, Sherry Fitzgerald Rainey, a sale has been ‘agreed’ for the Ballybofey land as well as the 0.32 hectare (0.79 acre) old Tinney’s yard site at the entrance to Letterkenny Shopping Centre.

A spokesperson for Tesco could not be contacted at the time of going to press yesterday (Thursday).

However, local Fine Gael Councillor and publican, Martin Harley, said it was unlikely that the store would now be built.

“I do not think the store will be built as, when plannign permission initially was granted, there were no large stores in the Twin Towns. Now, we have SuperValu, Aldi and Lidl,” he said.

Cllr Harley said he had been in support of Tesco coming to the area as, in the past, the area was losing 75 to 80 per cent of shoppers to Letterkenny and Derry.

For full report, seed today’s Donegal News or subscribe to our digital edition.