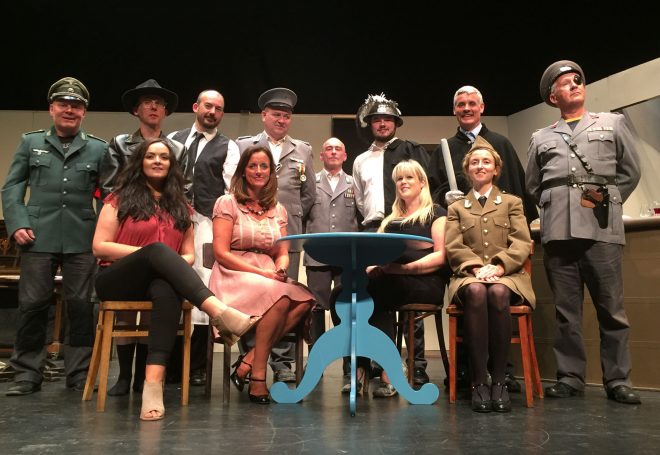 The cast of the Lifford Players’ production of ‘Allo Allo’.

THE latest production by the famous Lifford Players will have audiences in stitches this weekend at An Grianán Theatre in Letterkenny.

Opening tomorrow night (Thursday), the laugh a minute ‘Allo Allo’ will also be staged on Friday and Saturday, with curtains opening at 8 pm each night.

Set in occupied France during World War II, the play follows the trials and tribulations of Café owner, René and his friends.

Follow their attempts to hide the famous painting by Van Klopp of the ‘Fallen Madonna with the Big Boobies’ from the avaricious hands of their enemies, the Germans.

This is Lifford Players’ first venture into summer theatre and the cast reads like a who’s who of drama in the north west.

To name but a few, Chris Duddy from Letterkenny Musical Society, playing The Colonel, is an outstanding character actor of immense experience who has the ability to bring a character to life.

Elaine Gillespie of Letterkenny Music and Drama Group, playing Helga, is a wonderful actor, well-known to Letterkenny audiences from her performance in their brilliant production of 39 Steps.

Ballybofey native, Pauric Duffy, from the Butt Drama Circle, is playing the role of Gruber and has established himself as an outstanding comic actor.

Andy Mc Granaghan is very well known to local audiences as, among other things, a top-class stand-up comic. The play is directed by Clady native, Eddie Flanagan.

“It has been a privilege and an honour to work with some of the most outstanding talent in the north west of Ireland,” Mr Flanagan said.

‘Allo Allo’ was originally a hit TV series that ran for ten years from 1982 until 1992, and was written by Jeremy Lloyd and David Croft who also wrote that famous and gentle comedy ‘Last of The Summer Wine.’

So come to An Grianan this Thursday, Friday or Saturday night at 8.00pm for Laugh-a-minute theatre.