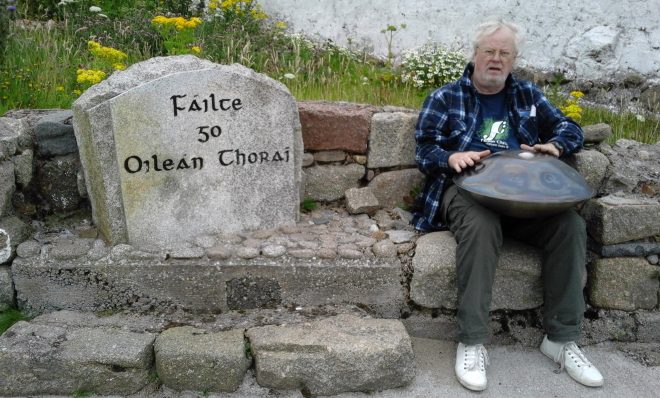 Harald Juengst with his new instrument called a “Handpan” or “Hang”.

THE sight of a German man playing a new musical instrument, created in Switzerland, in an Irish trad band has been turning heads in hostelries in west Donegal.
Harald Juengst, who hails from Duisburg, is a primary school teacher who left the classroom behind many years ago to tour world as a storyteller in both the English and German languages.
The man, known as Harald Mór in his adopted home village of Rannafast, is also a broadcaster and musician who plays the bodhrán and cajón with ‘Fior Uisce’, a local five-piece trad band.
Two years ago, he discovered the ‘Handpan’ after stumbling on a busker playing the instrument in his home city in Germany.
“It was something that looked like a cross between a flying saucer, turtle and a wok! I listened as the busker tapped the instrument, which emitted both drum-like rhythms and delicate harmonies, and I was hooked. The instrument has a way of capturing the heart,” he said.
“It took me about a year, and €2,500, to finally get my hands on the Handpan, or ‘the Hang’, but once I introduced it to my friends in Fior Uisce, they were stunned by the sound and the musical options that the instrument offers.
“We tried a few things out and we found out that it matches nicely with John Michael O’Donnell’s guitar playing and with Joe ‘Mhici Jimi’ Greene’s whistles.”
A few tunes were quickly arranged and brought to a live audience and it’s been well received, he added.
“It has eight different sound fields, mine is tuned in the key of D-minor. You can use it for melody playing and percussion as well.
“There is only a few makers world-wide who make really good quality Handpans and they have a long waiting list for customers.”
The instrument was created in Bern, Switzerland, by Felix Rohner and Sabina Schärer in 2001 after years of research into a new material called Pang. This material was intended to help further the evolution of the steel drum from Trinidad.
“Hang is a Swiss/German word which means ‘hand’ but other manufacturers call it a Handpan. The lower part of the instrument – with the hole in it – is made of stainless steel while the upper part is normal steel.
“I’m not aware of anyone else who has introduced this new instrument into Irish music. I think this is a first. It’s a drum – a sound sculpture – which you play with your hands.
“I normally play it accompanied by guitar and tin whistle but it also sounds great with the cello and fiddle. There’s loads of roads opening up in front of me to explore the wonderful sounds of the Handpan and we hope to put together a few recordings later in the year,” he said.
In the meantime, you can listen to Harald and Fior Uisce’s unique take on traditional Irish music – together with the Handpan or Hang – every Tuesday and Saturday in Jack’s (Caisleann Oir) Annagry or Leo’s Tavern, Crolly, every Thursday until the end of August.