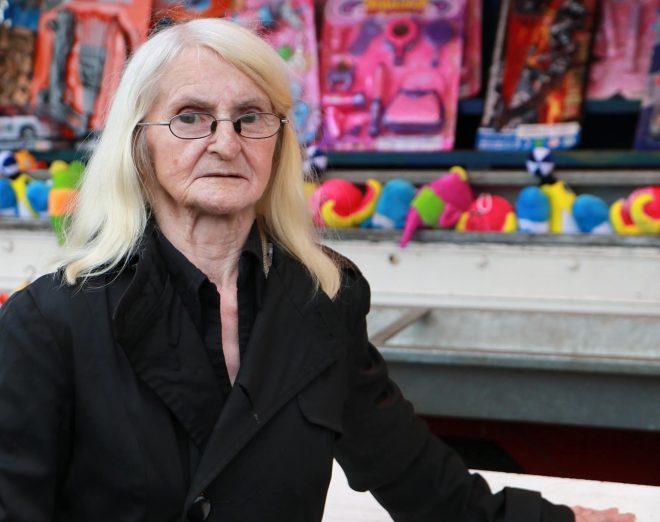 WHEN you enter McGurk’s funfair it’s as if the clock has turned back. The fair – which is in Dungloe this week – is a living museum that has stayed true to its roots over the years.
If it’s death-defying rides or thumping music that you’re after then you are probably in the wrong place. Instead, there’s good old-fashioned swing boats, bumper cars, and a carousel turning round to pleasant tunes – not forgetting the banter.
This is the fiftieth year that McGurk’s funfair has been coming to Dungloe and ever-present throughout that time is Mrs Colly McGurk. While her son John is the boss nowadays, Colly continues to be the real boss!
“It’s like a completely different world when you come to Donegal. You couldn’t get nicer people. They’re all so helpful. The children speak to you, their parents speak to you – it’s completely different to anywhere else in the world,” she enthused.
“My grandfather first came to the Fair Hill in Dungloe seventy odd years ago and my aunt, who is ninety, still remembers coming here as a girl and being taken into a local house for a bath. We’ve great memories of Dungloe where the funfair is known as Paddy the Swings,” she said.
McGurk’s funfair has been set up in the car park – the same location for the vast majority of their time in Dungloe.
“It used to be Doherty’s field. Old Mr Doherty, the grandfather of those who have the cafe now, sold the field to the Council but not before putting in a clause that we were to get use of the car park every year for the fair,” she smiled.
Based in Dunloy, County Antrim, the McGurk family spend the summer months living out of caravans as they travel the length and breadth of the country attending fairs and festivals.
“We’ve bumper cars with us, the Miami, bungee things that the kids love, rock and roll, kiddies rides – something for all the family,” she said.
It’s a far cry from when McGurks first arrived in the town all those years ago.
“When we first came we had swingboats, a few kiddies rides and a couple of stalls. One year we brought all the machines to town but we found that there was no room then for anyone to park and it was too cramped,” she said.
After Dungloe, the funfair makes its way to Gweedore and the season finishes with the Harvest Fair in Glenties in September.
“We used to come to Letterkenny when it had a festival. Again, it’s a lovely town with lovely people. We also go to Falcarragh. Donegal is full of wonderful characters and wonderful people. Honestly, I’ve never ever seen a better place in the my life. If you could bottle what they have you would make a fortune,” she laughed.
Colly will celebrate her 70th birthday in December and she’s in great spirits given that she left last year’s Dungloe festival in the back of an ambulance.
“I went to meet Daniel O’Donnell in one of the town’s bars when I collapsed. I had an aneurysm in my brain and was taken to Letterkenny hospital before being transferred to the Royal in Belfast where I stayed for eight or nine days.
“My kids won’t allow me into a bar again as last time I went into one I was legless and didn’t come home for a few weeks,” she laughed.
“I’m staying in the caravan and there’s no point having one with you if you’re not going to stay in it. As my mother always used to say you have to stay with the show and, hopefully, make a few pound along the way,” she smiled.
Over the coming days many people, both young and old, will visit McGurk’s funfair creating memories which will last a life-time.