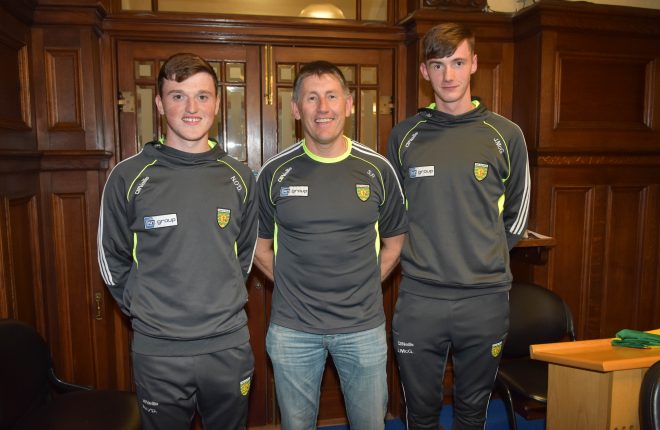 DUAL star Jason McGee has put his soccer commitments on the back burner this year as he tries to lead Donegal to the Ulster Minor Championship title.

McGee is a talented centre-half in soccer and represented the Republic of Ireland at Youth level.

In 2015, he was a key member of the all-conquering Letterkenny Rovers Youth side, and it was only towards the end of their campaign, that he was called into Declan Bonner’s minor panel.

The towering Cloughaneely man soon established himself in the team, but there was huge disappointment for Donegal as they lost in the semi-final against Derry.

McGee said: “Last year I missed the whole league campaign as I was playing soccer. I played with Letterkenny Rovers and Finn Harps and enjoyed it. Gaelic, at this time of year especially, is much more important to me. We’ll see how far we can get.

“But after that Ulster semi-final last year I just said to myself that I want this Ulster championship so I wanted to come back. Had we won last year then you wouldn’t know what way I would’ve went then with soccer or Gaelic.

“I just seen how hurt I was last year and how hurt the rest of the lads were. We carry a lot of experience this year and we’ll see where that can take us.”

That defeat last June was hard to take, but McGee and the other under 17s who were part of that squad – Seaghan Ferry, Niall O’Donnell, Eoghan McGettigan, and Nathan Boyle – bounced back and won the McGuigan Cup later in the season, and that was a crucial triumph in this team’s development.

“Winning the McGuigan Cup was important. After we got beat by Derry Brian McCabe was in charge of the Under-17’s and he gave us a couple of weeks off. Then we were back at it then – me, Eoghan and Niall – and the other minors. Coming back to the Under-17’s was a good lift to us and it was nice to win it.”

Donegal haven’t looked back since that success, and under the guidance of Shaun Paul Barrett, they have also collected the Ulster Minor League title and now have their eyes set on lifting the Fr Murray Cup.

Joint-captain McGee impressed in the semi-final victory against Monaghan scoring 1-2, while his midfield colleague Kieran Gallagher picked up the man-of-the-match award, and they are a formidable duo in the middle third.

“I’ve a good partnership there with Kieran in the middle of the field. You could see it there in the last game. His fielding was phenomenal – couldn’t have been any better – and it’s good to have a good partner. He’s a good player.

Derry will have identified the McGee-Gallagher alliance as key to Donegal’s game plan and they will be looking to break their stranglehold in midfield However, McGee is not concerned about that and he will just play his own game.

“We’ll not worry about it. They won’t be pinning it on me and Kieran. I didn’t get as much freedom last year as I was holding the middle.

“But this year myself and Kieran have as much freedom as we want. Both of us get forward equally and back equally. If he goes I’ll sit for him and vice versa.”

McGee has enjoyed the build-up to the final over the last three weeks, and he has been inundated with well wishes in his home town.

“It’s been good in Falcarragh. Whenever you’re in the town or in any of the shops people are asking you how it’s going. You know they’re behind you and they’re dropping wee hints about tickets.

“They’re all buzzing and are behind you. We’ve Michael Mulhern too. It’s good for Cloughaneely as well. It’s been a while since we’ve had anyone on the county teams.”