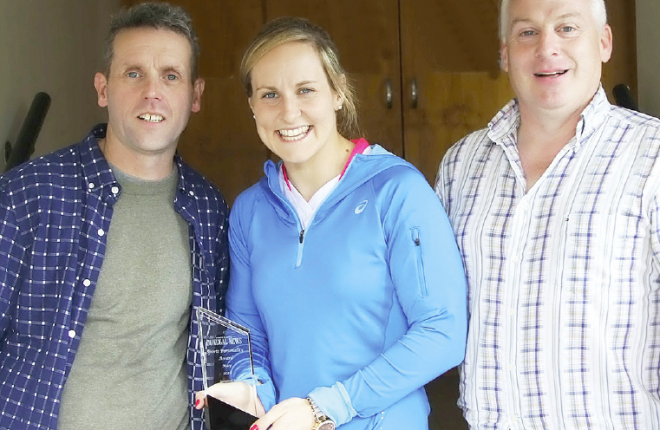 Karen Guthrie, Donegal News Sports Personality of he Month for May 2016 with Liam Porter and Harry Walsh, Donegal News.

WHEN the Donegal Ladies kicked off their league campaign at the end of January, Karen Guthrie was watching from the sidelines. It was not somewhere that she wanted to be.

The Glenfin midfielder had torn ligaments in her ankle in April of last year in a club game, but such was her determination to get back on the pitch that she played a few minutes when Donegal were crowned champions of Ulster.

She appeared again as a sub in the all-Ireland quarter final, but in her heart she knew really that her ankle was not up to scratch.

“I got injured playing in a league game for the club, I tore ligaments in my ankle. I tried to get back, I lost 10 to 12 weeks initially and when I came back it still wasn’t right so I got a second scan on it. I had chipped two different bones in my ankle, so there was a bit of bone was floating about in there. I got that removed in November but effectively my season was over in April. You are still living in hope because I thought I’d still have made championship, but you are continually playing catch up, so my season was pretty much wiped from that moment on.”

Looking back, Guthrie, who started this year’s league campaign on the sideline and finished it with a storming player of the match performance in the league final in May, attributes her cameo championship appearances last season as a hat-tip from the management to her for loyalty to the Donegal cause over the years.

A vital cog in the Donegal machine and a real student of the game, it is typical of her to wonder now in hindsight, if that was the right thing for the team. “I lost the league, I got a couple of minutes in the Ulster final and as the time went on trying to get into the quarter-final, it was always going to be tough. I played the last few minutes in the Armagh game and probably truth be told, looking back I probably wasn’t fit enough to play. There were probably people beside me on the bench maybe should have got the nod ahead of me. I dunno maybe the boys being loyal thought they’d give me the shout because I’d missed so much.”

It’s a modest summation, because as one of Donegal’s most experienced campaigners by far at just 28, it’s easy to see why she is the type of player a manager will always turn to.

Her very presence on the pitch is often enough to lift the game of those around her. But, to be on the pitch and not be able to give a full 100% is not in her DNA.

She was more determined than ever to be back playing this year and giving her all. She admits, that was a lonely road to be on at times, but one that had to be walked so she could pull on the green and gold again and not just for a few fleeting minutes.

“It’s a horrible place to be and it is not something that I have ever been used to. I have been very lucky and that is something I took for granted. I am in my 11th straight season now and last year is the first one that I had missed so much of. That feeling of helplessness, there is nothing that gets past that. You are standing and there is nothing that you can do, nothing you can say. You know what its like to be standing in that position when games are tight and you want to know what the right things are to say, but you just don’t, you just want to be playing. It can be a pretty tough place to be. There are a lot of days on your own and it can be a lonely enough. There are a lot of days outside of the group and every session they do you feel like you have to do another one to try to catch up on them.”

Being outside the group, not feeling really part of it while she worked on her recovery, was a killer for Karen. For her, it is always about the team.

“It has always been about the team. The individual stuff – you take a notion the odd time that you’d take up an individual sport – but even running on your own doesn’t do it for me. You like to think maybe what you might do when you retire, what you’d do after you finish playing and maybe you go through phases of thinking that way, but no, the goals for me have always been about team. If it’s the club and winning a county championship or a gaeltacht championship or with the county and winning an Ulster championship, it’s always ever been about the team.”

Her hard work and determination to get back to it for the team, meant that she was back in action in the league campaign that ended with a 3- 17 to 0-13 point win against Westmeath in the Division 2 final, a game that earned her a player of the match accolade.

“We weren’t challenged really in the league.The first game was against Westmeath and I was still out from my operation and I remember watching that game and thinking Division 2 is going to be a challenge for us. After that though I think we were pretty comfortable in all of our games and we were happy enough with that, because if we were comfortable there then there’s a chance that we were somewhere between Division 1 and Division 2 standard and we wanted to push for Division 1 – we were pretty happy with all the results.”

By the time championship rolled around, several of the team’s key players had departed for America. “It is an amateur sport and you can’t stop girls from going you’d like it to be different but you can’t stop them. We lost five of our starting team probably all key players, from that day onwards you have to start again and say this is the way it’s going to be and we probably didn’t do it well enough.”

Counties like Cork and Dublin lead the way in ladies football and Karen says it’s vital for Donegal to try to keep up and with that in mind a stream of new young players has to keep emerging.

“There was time a good number of years ago under the Kenny Griffin era when we were producing great young players, it was kind of a conveyor belt and they were feeding the senior team continually. It is probably something that we need to look at again, what are we doing that’s different, what are we not doing that the Dublins and the Corks are doing because that conveyor belt has to stay running all the time to feed the senior team. When you stop feeding the senior team – you get retirements and a few gap years and if you don’t have the replacements suddenly you find yourself slipping down into division 2. That’s how all that happens, we need to keep producing them and it having a long term plan in place to make sure that happens.”

Karen acknowledges though that keeping girls involved in sport has always been difficult and is one of the obstacles the game faces. “It is a huge challenge to keep girls involved in sport. There are a lot of girls in sports initiatives now, but I think maybe it’s a stage in life. You might play all underage and then your school changes, you get into secondary school and if the group you fall in with maybe don’t have an interest in sport, then you can very easily fall off the train there very handy. It is just a stage in a girl’s life. The teenage years are a challenge, there are so many things happening in their own lives that getting them to stay involved with sport is a huge challenge but there is a lot of support now, things like the girls active programme and a lot of things going on.”

Down the line she can see a role for herself coaching young girls and helping them develop their game. “At club level I would love to take an underage team, maybe that U16- 18 age group. I would have been involved with development squads a few years ago. I like coaching, I love the game and you are always watching players, young players developing. I love that at club level – I love to see how dedicated they are to developing themselves as a player and working hard to get into the senior team.”

It is that love for the game that shines through, that has new targets already on the horizon for Karen, for both club and county. For the team. It’s always about the team.