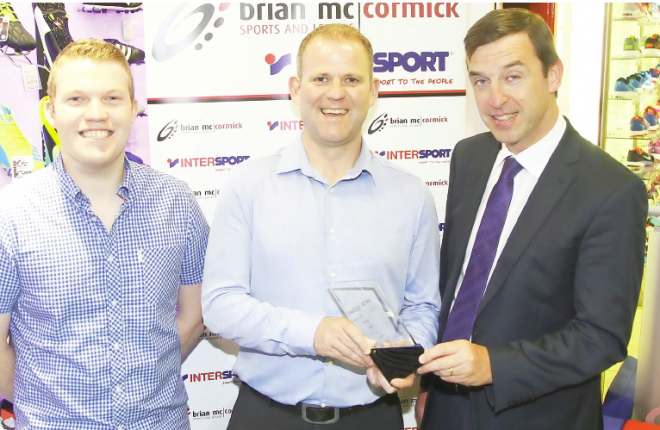 MANUS Kelly has just experienced a month that he never anticipated in having in his ‘wildest dreams.’ Kelly claimed a famous victory in June as he clinched the 2016 Joule Donegal International Rally title.

The Glenswilly man wasn’t leading the rally but a stunning final stage saw him overcome Keith Cronin and win the title by just 0.5 seconds.

Kelly has been basking in the glory of his triumph since and he has been overwhelmed by the support and well wishes he has received from people in the county and further afield.

“It’s been unreal. The feedback I have received from neighbours, friends, family has been incredible. Even people I don’t know have been stopping me on the street, and asking me to get in photos and things like that. “I’ve opened a few festivals and I’ve done a few wee things for a couple of charities as well. “I’m not used to it at all, but I’m just making the most of things and enjoying it.”

Kelly – affectionately known as Mandy – spent the best part of a decade trying to win the Donegal National Rally. He encountered hard luck story after hard luck story, but last year, the Glenswilly man and his co-driver Donall Barrett finally achieved their goal.

The Donegal partnership decided to take part in the International section of the rally this year and they obtained a S12 WRC car from Melvyn Evans Motorsport in Wales.

After waiting so long to win the National crown, it was ironic that Kelly claimed the International title at the first time of asking, but he says he had to work very hard to win. “It was far from easy. It just came so quick.

“Winning the National was always my major dream and it took me ten years to do it. “It was very difficult, especially when you were coming up against the modified cars and the competition was fierce. “I didn’t know what to expect from the International, but I knew I would be up against a lot of very talented drivers.

Kelly made his debut in the WRC car at the Seven Oaks Hotel Carlow Rally back in May, and claimed an impressive debut victory. That gave the 38-year-old encouragement but he knew he would face a much sterner test in Donegal.

“It gave me great confidence, because it was the first time I drove the car. “I knew there was more in it, and I knew there was more in me as well if I could get more time with it. “We knew it was a very fast car and it was just about getting used to it quickly. It was a compelling weekend of rallying with plenty of twists and turns.

Kelly made a good start to the rally, but a problem in Stage 8 on Garrygort saw him lose almost two minutes. It was a big blow, but Kelly had been working with David McGinley in the lead-up to the rally and the Sports Psychologist got the driver to refocus again.

“I was the first one to make a booboo.We lost a good bit of time, and if I’m honest, I thought we were goosed at that time. I had been working with a sports psychologist in the lead-up and during the rally, and he was a big help to me. “My head was down, but he just told me that the rally wasn’t even half over at that stage. “He told me to just grit my teeth like a dog would do as it’s preparing to fight and that’s what I did.”

Kelly and Barrett managed to get the show back on the road, but they were still well off the leaders on Saturday evening. However, the drama was only starting to unfold. Garry Jennings, Declan Boyle and Donagh Kelly were all forced to retire, and going into Sunday’s rallying, the 2015 National champion was still in contention, but he needed a big final day.

“We got off to a very good start in Glen in the morning and that was important. “We were probably lucky enough to survive on Atlantic Drive, because the conditions were treacherous. “We went to Fanad, and managed to take 18 seconds off everyone there and that was huge.

“I got my tyre choice spot on there and although there were some hairy moments, we did very well. “It was just a surreal feeling to be told we had won it. My dream was always to win the National in a Mark 2 Escort and never in my wildest dreams did I think I would be in the mix to win the international.

“On the final stage, the aim was to just drive through the line as fast as we could, and we ended up winning by 0.5 seconds. What more can you say?” While Kelly has received plenty of plaudits over the last month, he is quick to point out that the triumph would not have been possible if it was not for his co-driver Barrett.

The Milford man has been calling Kelly’s pace notes for ten years, and together, they make up a formidable partnership. “Donall has been with me ten years since the end of 2007.

He first sat on with me in an Evo 7, and then we went into the Mark 2 Escort for nine years, and into the WRC car in 2016. “He’s a very professional navigator and he’s just brilliant.

It’s hard to explain what it’s like in the cockpit when you’re going for it. “It’s just two people who are going mad at it to try and win. He’s watching on at the crazy things I’m doing and he’s backing me to the hilt every time. To me, the navigator is the main man.”

Kelly also reserved special praise for his wife Bernie, who he says has been a constant source of support. “I’d like to pay tribute to my own wife, Bernie. It’s not easy for her to watch on, and we had one really tight year in 2014 and it looked like it was almost retirement time for me.

“If she had her way it probably would have been retiring at that time, but she respected my decision to continue doing it, and kept backing me, and we have won every rally we have been in since. Kelly is giving serious consideration to do the Harvest Rally later this year.

He hasn’t done it in five or six years, but as it will be dedicated to the memory of his friend and Donegal Motor Club stalwart Martin Howley, who died last year, it looks like he will get behind the wheel again.

He has also started to look forward to 2017, and while his busy work life and family life will curtail his rallying somewhat, he will definitely be aiming to retain his Donegal International title next June.

“I’m hoping to do a few rallies next year, but it will probably be in the National Championship, not the Tarmac Championship. “I have a few businesses to look after and a young family as well, and it is just too time consuming. “But I definitely will be back to defend my title. I’m not going to miss the chance to be number 1 on the roads of Donegal.”