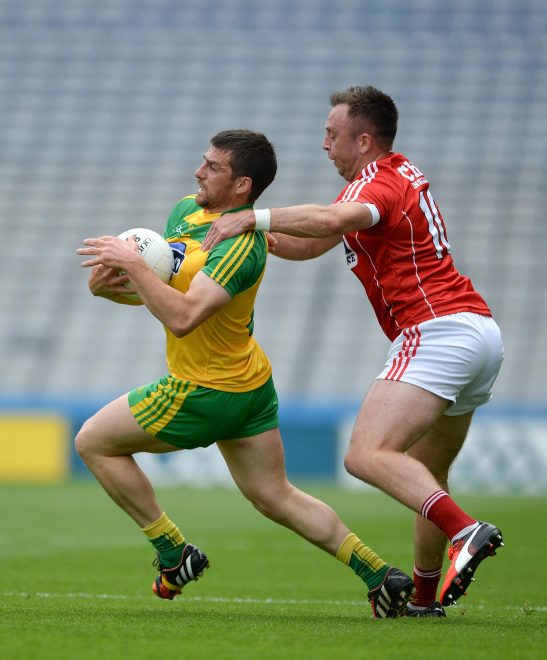 Paddy McGrath of Donegal in action against Paul Kerrigan of Cork.

Three Ulster championship medals, alongside his All-Ireland medal from 2012, take pride of place on the mantle piece at his Loughros Point home but he’s greedy for more.

McGrath is one of a new breed of Donegal players who have become accustomed to success but yet his feet remain firmly planted on the ground.

An engineer by profession, Paddy got precious little time to lick his wounds following last month’s Ulster final defeat at the hands of Tyrone as he was back at work on the Monday morning.

Today’s a Bank Holiday so he is afforded a little more time to enjoy the Croke Park win over Cork but you get the feelings that that can wait.

Speaking to reporters outside the Donegal dressing room under the Cusack Stand, McGrath already had one eye on the next challenge – the Dubs at Croke Park.

“It’s always good to play in Croke Park and it was good to get a run out there today but Dublin will be a massive challenge. We’ve a week now to get ourselves ready. It’s a short time but we’ll have to push on and get on with it,” he smiled.

Donegal got a two-week break following that Ulster final defeat, one which McGrath admits is still hard to take.

“It’s always a sticky game if you lose an Ulster final. It’s hard to lift your spirits again so it was great to get through today’s game. That’s a big plus. It’s another game under our belts and it won’t be hard to lift ourselves for the Dubs in Croke Park. We would rather have a little more time to get ready but it is what it is,” he said.

Reflecting back on the Cork game, the Ardara man said the result was in the balance throughout.

“It wasn’t until the last ten minutes that we started to pull away. It was always going to be tight, especially after the Ulster final loss, but you have to step it up a gear for the All-Ireland series,” he said.

The Donegal corner-back got a better view than most of Patrick McBrearty’s superb 11-point performance but he wasn’t surprised.

As a member of the Defender Union though was he happy that Donegal conceded 1-15?

“There is room for improvement. It was shoot out more than anything else but it was good to get through the game. I know we conceded a lot but it’s something we’ll have to work on the next day,” he said.

Tasked with marking Cork captain Paul Kerrigan, what did he make of the game’s only goal – scored by Kerrigan.

“We had the ball and there was a turn-over. There might have been a pull back or something but these things happen. Either way we lost possession. Kerrigan is one of the best forwards in Ireland and if he gets a sniff at all he’ll take his chance,” he said.

Although there was a small crowd in Croke Park the vast majority of them were sporting the Donegal colours.

“They always give us great support and I can’t thank them enough. They always give us a great lift and we go out and do our best for them every single day. We are a proud country and we don’t like bad press. We love to see them coming to Dublin. They enjoy their day out too and it helps if we can get a result for them,” he said.