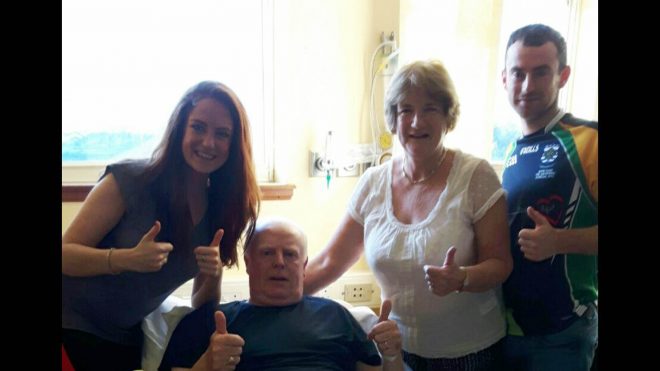 A MAN who nearly died after he suffered a cardiac arrest during a game of golf last week has praised his fellow golfers for saving his life.
Sean Culleton, 63, a retired warehouse manager from Ballyshannon, collapsed during a Donegal League game between his club Bundoran and Cloughaneely on Thursday last.
Standing on the 12th tee in Cloughaneely, Sean had just smashed a great drive up the centre when he fell to the ground. Lucky for him, Brian McGee, on the opposing Cloughaneely team, is a trained ‘first responder’ and he initiated what was to follow.
Owenie McGee, also a trained paramedic and member of the fire service, was up on the next green. He raced down and commenced the CPR while two other firemen Denis Boyle and Joe Friel came from two more greens.
Their colleague Antoin McGee was soon on the scene with the local fire brigade defibrillator and for forty minutes they worked and worked on Sean while Dr Lochlann McGill, who lives nearby, was also present.
Following the dramatic rescue, Sean was rushed to Altnagelvin Hospital where he was diagnosed with having had a heart attack and he had a stint inserted before being transferred to Sligo University Hospital from where he was allowed home on Tuesday.
Speaking to the Donegal News from his home on Wednesday, Sean, who is well on his way to recovery, was anxious to give credit to his fellow golfers on the course who gave CPR and ‘stopped the clock’ until paramedics arrived.
“It was the shock of being five up as we stood on the twelfth that did it,” he quipped.
“On a more serious note though I had been feeling tired for a few days in the lead up to the game and just thought that I was getting too old to be playing competitive golf. I remember telling the lads that I was feeling tried as I stood on the tee and the next thing I can recall is waking up in the ambulance in Stranorlar on my way to Sligo. I don’t remember being in Altnagelvin at all,” he recalled.
Married to Mary, the couple have three children – two girls and a boy.
“Fair play to the boys. I owe my life to them. They brought me back from the edge of death – quite literally – and it looks like I’ll be here for a while yet to annoy Mary, thank God. I’ve to take things easy for the next ten weeks at least and we’ll see what happens from there,” he said.
Micheal Murray, Cloughaneely Golf Club PRO, said the incident showed the value of early CPR and said he was in no doubt that it saved the golfer’s life.
“The intervention on the course by his fellow golfers was what ultimately saved Sean’s life as, to all intents and purposes, the man was dead. That’s what the doctor told us,” Mr Murray said.
“He was just lucky that the right men were in the right place at the right time. I visited him in hospital earlier this week and he wishes to express his deepest gratitude to Antoin, Brian, Denis, Joe and Owenie. Let’s congratulate all involved in taking action to save a life. Dr McGill was extremely impressed by their professionalism. Those of us present witnessed people trained in CPR and the availability of a defibrillator saving a life,” Mr Murray said.
The PRO said he would encourage everyone to ‘get stuck in and learn CPR’ as, one day, you could be in the right place at the right time to save a life.