Advertisement
HomeSportGAADECLAN BONNER : There will be a bumper crowd in Breffni
Advertisement

The sides may have finished level in Kingspan Breffni Park last week, but that doesn’t mean there wasn’t a winner.

The Ulster Council will be laughing all the way to the bank as they are in for two bumper crowds this weekend.

Donegal and Monaghan will go to war again on Saturday, before Tyrone and Cavan renew acquaintances in Clones the next day.

Bizarrely neither of these games will be on TV. We’ve heard people lamenting the poor quality of the championship since it started, and yet this week, we have two excellent games taking place, and the armchair supporter won’t be able to watch them.

You’d think in this day and age that we would be able to get round such blackouts, but the TV companies are calling the shots.

The word coming out of Donegal this week is that they will have a clean bill of health for the replay and that is vitally important. You don’t want to go to Cavan missing a few key players, as there really is nothing between the teams.

Last week’s encounter will have brought on the likes of Karl Lacey and Michael Murphy, who have not played a vast amount of football in the last six weeks.

Mark Anthony McGinley, Kieran Gillespie, and Eoin McHugh would never have played in a cauldron like Kingspan Breffni Park last week, but they all came through it well, and they will be biting at the bit to get going again this Saturday.

Last week’s game was compelling, even if the quality was not always evident. We had poor wides, a lot of turnovers and some needless unforced errors, but those things can happen when the pressure is on.

Donegal will take a fair degree of confidence from the match last week, but they will know that they need to convert their chances if they are to make the Ulster Final.

Michael Murphy has probably never had a day when his shooting was so off, and you can guarantee that he will have been on the training pitch this week, getting plenty of practise in.

Murphy is so mentally strong, that you wouldn’t have any concerns about him when he stands over his first free on Saturday night.

The Glenswilly man posed serious questions of Vinny Corey last week, and I expect to see him on the edge of the square again. 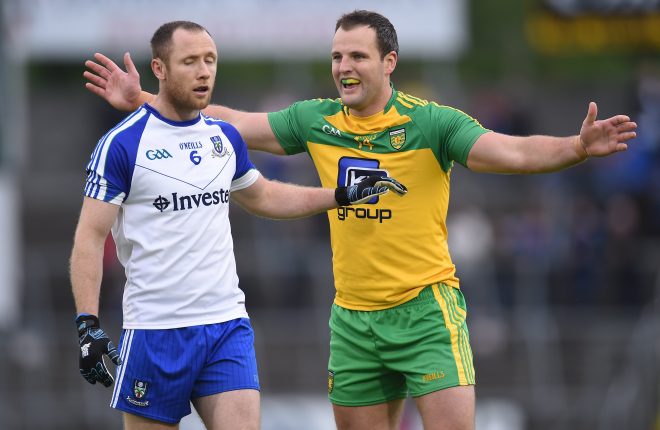 25 June 2016; Michael Murphy of Donegal in action against Vinny Corey of Monaghan during the Ulster GAA Football Senior Championship Semi-Final game between Donegal and Monaghan at Kingspan Breffni Park in Cavan. Photo by Ramsey Cardy/Sportsfile

Corey wants Murphy to drift out the field, but I would leave Murphy inside and see what the Monaghan defender – who is pushing on in age – is really made of.

Kick-outs had a huge impact on last week’s game and I would expect the same again in the replay.

The Donegal restarts caused a bit of a stir last week as Mark Anthony McGinley opted to go long.

The Donegal defenders were really gambling on the second phase ball and it reminded me of the All-Ireland semi-final against Dublin two years ago.

They didn’t want to go short and allow Monaghan to get their players filtered back. So the aim was to go long, try and claim possession and get it into Murphy and McBrearty straight away.

It didn’t materialise too often, but when it did, we looked dangerous.

There will be a lot of work going into kick-outs this week, and I’d imagine Donegal will alter their strategy a bit in the replay.

I’ve seen Mark Anthony up close with St Michael’s for nearly a year now, and he’s a very capable goalkeeper. He’s quick and he’s got a good kick, and I would trust him to produce the goods next week.

Donegal seemed to only push up on Rory Beggan’s kick-outs after they had a free and had time to get up the field and organised.

When they kicked a wide from play, they allowed Beggan to play it short and Donegal got back into their defensive shape.

It was an interesting ploy, but I would be inclined to attack all their kick-outs.

Monaghan do not have a David Moran or a Brian Fenton. In fact last week, they had no real out-and-out midfielder playing.

I feel Donegal would definitely match if not better Monaghan in the aerial exchanges if the ball was kicked out, and I think we should try and create 50/50 situations at all times.

It’s going to be a real tactical battle and I think the game could be decided by which side uses their substitutions better.

Donegal were very slow to make changes and yet Christy Toye was hugely involved in the eight minutes he was on the pitch.

Games like last week are energy-zapping and the last thing the opposition want to see is fresh legs coming in. Donegal have options on the bench and I expect Rory to use more of them on Saturday.

Monaghan manager Malachy O’Rourke will have been annoyed with a number of aspects of the game last week.

His team were leading by two points when Donegal went down to 14 men, but they didn’t use their numerical advantage at all. There was no clear free man as such, and while they should have been able to create overlaps, they didn’t get enough men forward.

They didn’t get enough from Conor McManus last week, while Kieran Hughes came out second best against Eamon McGee, and you can be sure that the Donegal defender let him know that.

Donegal got most of their match-ups right last week, but Karl O’Connell was given too much room and someone will be detailed to shadow him this week.

Eoin McHugh followed him for a while in the drawn match, but he is probably wasted in that role.

It needs to be someone strong and athletic, who can run all day, and after the Kieran Gillespie gamble paid off last week, maybe it’s time to throw Eoghan ‘Ban’ Gallagher into the mix and I feel he would be fit for O’Connell.

I think Monaghan could go ultra defensive this week. They passed up goal opportunities last Saturday and so much of their game revolves away not conceding three-pointers.

Don’t expect a high-scoring game this week. Every point is going to be hard-fought and Donegal have to take their chances when they come. 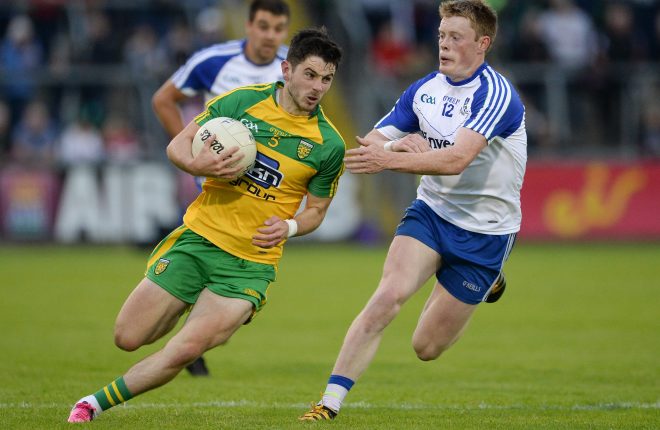 25 June 2016; Ryan McHugh of Donegal in action against Ryan McAnespie of Monaghan during the Ulster GAA Football Senior Championship Semi-Final game between Donegal and Monaghan at Kingspan Breffni Park in Cavan Photo by Oliver McVeigh/Sportsfile

Breffni Park will be rocking on Saturday, and the Donegal supporters have a part to play as well. We need them out in their numbers and try and push the team over the line so they can join the minors in Clones in two weeks’ time.

It’s going to be very close and will come down to small margins. It’s hard to call, but I can make one prediction with confidence, and that is there won’t be six minutes of injury-time this week!

If we can tidy up a few aspects from last week’s game, I think we are a better side than Monaghan and we should make the decider.

I feel that Cavan have missed the boat.

They went out with a plan two weeks’ ago to hit Tyrone for goals. They did that three times and yet still didn’t win the match.

Tyrone will have learned plenty from the game and I would expect to see one of the McMahons back in manning the house this week.

If we think back to 2008, Tyrone were worried about the aerial threat of the twin towers – Kieran Donaghy and Tommy Walsh – in the All-Ireland Final, but they managed to keep them quiet, and they will have a plan in place for Cavan this week.

I expect the Cavan full-forward line to be suffocated out of it this week, and I don’t know if Terry Hyland’s team have the firepower if they can’t get goals.

Cavan are an up-and-coming side but Tyrone got out of jail in the drawn match, and I expect Mickey Harte’s team to keep a clean sheet this week and reach the Ulster Final.

Tipperary have done a huge amount of work at underage level in recent years and it’s great to see them in the Munster Final.

They are a big hurling county, and while football will always come second, they have some very talented players.

Tipp beat Cork in the semi-final and while the Rebels are at a low ebb, that’s not a result to be sniffed at.

They went in front, before allowing Cork to come back into things, but they were still able to close the game out.

I fancy them to test Kerry for periods, but Eamonn Fitzmaurice’s team have eyes on All-Ireland glory, and they shouldn’t have any real problems this week.

Kerry have introduced a few younger players after losing the League Final to Dublin and I think they will win by five or six points this week.