THREE lads from Donegal have graduated from Boot Camp and will travel to Kerry as Rose Escorts at the 2016 Rose of Tralee International Festival.

Struan Charters (24), Tom Cranley (27) and Mark Harley (23) were among the 65 guys who will be the Rose Escorts to 65 Roses taking part in this year’s extended Festival from 17-23 August in Tralee.

The lads were put through their paces over the Bank Holiday Weekend at the annual Boot Camp in Dingle, Ballybunnion and Castlegregory along the Wild Atlantic Way in Kerry.

The Rose of Tralee International Festival’s Communications Manager, John Drummey, said: “The Rose Escorts spent three days in Kerry where they undertook a number of endurance tasks to prepare them for the festival in August. It was not because the ladies love Milk Tray but because the lads prefer Roses. Over 200 men aged between 21 and 30 applied to become Rose Escorts at this year’s Rose of Tralee International Festival and following a detailed interview process, the final 65, the most ever, were selected to take part in a Boot Camp weekend in the Kingdom to help them cope with the demands of a busy week in Tralee.”

The lads had to carry out a range tasks including a cycle over Connor Pass, a hike up Mount Brandon, turf-footing, abseiling, kayaking, surfing, ironing and sewing in order to prove they will have the stamina to be a Rose Escort.

This year’s Rose Escort Boot Camp activities were supported by Kerry County Council and Kerry Civil Defence, under Civil Defence Officer Tom Brosnan, who played a major role in the transport and logistics of the event.

Nearly the whole country has been represented with the Escorts hailing from 26 out of the 32 counties and one of the lads will be selected as the Rose Escort of the Year live on RTÉ One on Monday 22nd August.

The 2015 Escort of the Year, Shane Kenny from The Spa, Tralee, Co Kerry, said: “Having been selected as the Escort of the Year was nothing short of a great honour. The opportunity to represent a fantastic group and to accompany our Rose of Tralee, Elysha Brennan, at numerous events has been a brilliant experience. I’ve traveled extensively attending many charity events and Rose reunions while also working closely with a fantastic Rose of Tralee Team who couldn’t have done any more for me. I’ve made memories and friendships that will be cherished forever.”

Full details of this year’s Rose of Tralee International Festival are available from www.roseoftralee.ie, Facebook and Twitter @roseoftralee 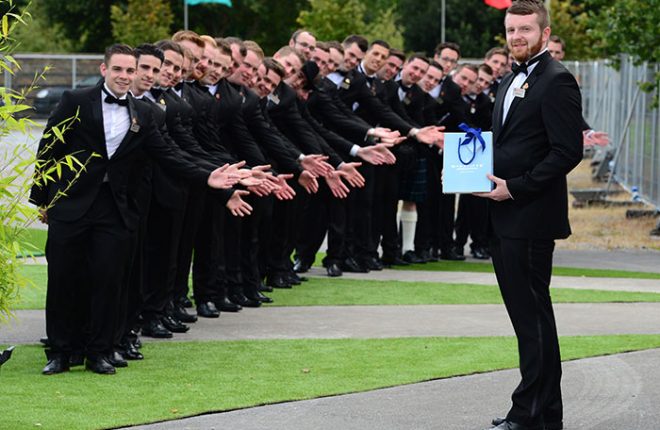 Shane Kenny who won the Rose of Tralee Escort of the Year in 2015.