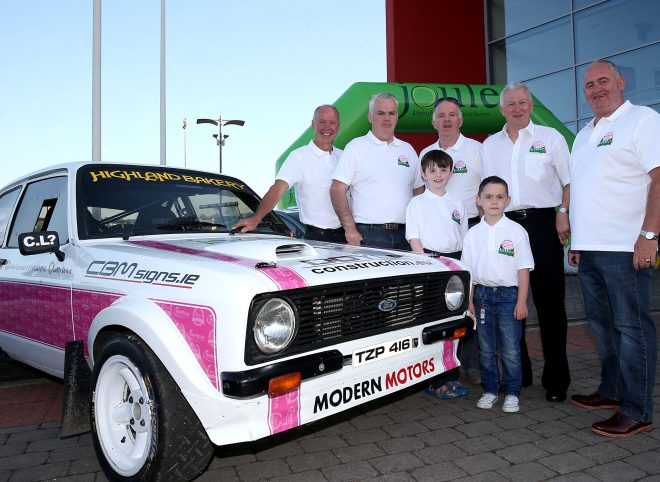 James Cullen and members of the ‘Cullen 4 Donegal’ team.

We may still be six months away from Christmas but Santa Claus made a welcome, if unexpected, visit to Letterkenny earlier this month.
As a child, the anticipation of Christmas was one of the best memories ever and on Friday, June 3, at the Aura Leisure Centre we were all briefly transported back to a time when we looked on in awe upon seeing all the presents neatly wrapped under the tree.
On this occasion Steven Sheridan, Denis Orr and Aidan Caddye took on the Santa role while local rally legend James Cullen was the recipient of the present which came in the form of a MKII Escort.
“It’s the first time I’ve seen the car. It’s fantastic and the way the car has been done up is just brilliant. It’s got the Donegal logo and includes the pink from the pink Sierra days which is a nice touch. It’s a celebration and a reminder of the people who enjoyed that time but who, sadly, are no longer with us. People like Ellen (Morgan, his co-driver), Bertie Fisher, Mark Lovell and Colin McRae – they’re all gone. Closer to home, men like Eamon Harvey, Sammy Fisher and James McDaid have also passed away,” Cullen said.
It’s 25 years ago this year since one of Donegal’s greatest rally drivers won his home event for the first time and more than a decade since he last competed in the famous three-day event.
Winner on two occasions (’91 and ‘99), James finished second a further five times while he was third on four occasions. He was also Clerk of the Course twice and his name is synonymous with the Donegal Rally.
As part of their bid to commemorate his maiden win, a group of friends came together earlier this year to fund-raise to secure the money needed for James to take part in this year’s rally.
“I would like to congratulate the boys. They’ve ticked every box so far. They’ve also managed to sort out the back up team – it’s all coming with the car. These rally fans have done a super job. A few months ago this was nothing more than a pipe dream and yet here we are now – I still can’t really believe it,” he admitted.
“I hope to do the Laois Rally in a 00 car the Sunday before Donegal and that will get me settled hopefully,” he added.
What about this weekend’s event. With experienced Monaghan co-driver Damien Connolly sitting alongside him has he set any goals or targets for the Donegal Rally?
“I’m too old now. I don’t want to go quick any more but I do want to be able to go hard enough to enjoy myself. My aim is to get the car to the finish ramp on the Sunday evening so we can talk about it for another ten years!
“That said, if I’m twenty seconds behind the last man going into the last stage on Sunday I might have to do something about that,” he laughed.
James’ navigator this weekend is Damien Connelly, better known as The Dent Man.
“Hopefully it’s his co-driving skills and not his dent fixing skills that we’ll be talking about from the weekend. He’s sat on with a lot of the top boys and we managed to get his arm twisted to join me for the weekend,” he said.
Although he’s staying with Ford – James will be driving a MKII Escort this weekend – it was a Sierra Cosworth he drove when he first won the event in 1991.
“It’s (MKII Escort) got a two and a half litre Vauxhall engine with 330 brake horse power which is way too much for me. It’s a lot lighter than the Sierra would have been but the acceleration would be every bit as good – it’s quick enough,” he smiled.
“My era is over but it’s great that people can still remember those days. It’s now their time (supporters) and it’s great that people have come back to support this and make it happen,” he said.
Cullen’s MKII Escort was one of a number of cars competing in this year’s event which were parked outside the Aura to mark the rally’s official launch.
“Every one of the cars around me would be quicker than the MKII Escort but sure that’s modern cars.
“This is a reminder and celebration of years gone by. When the rally starts it will be all about the quick boys. There’s an International title on the line and that’s what will grab the headlines. It’s going to be one hell of a battle,” he said.