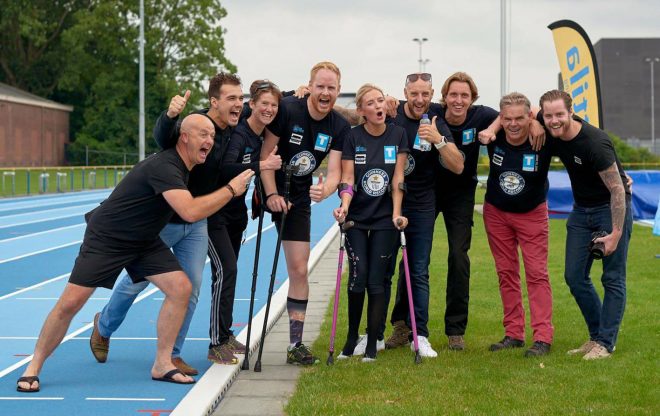 Nikki Bradley with Michael Robbert and their team following their record breaking 5K.

DONEGAL News columnist Nikki ‘The Fighter’ Bradley broke a Guinness World Record at the weekend to become the fastest woman to complete a 5K on crutches.

The successful record attempt took place in Tilburg, Holland, on Saturday, where she recorded a time of 44:21, smashing the old record by more than five-and-a-half minutes.

On the same day at the same time, and on the same track, adapted athlete Michael Robbert Brans also broke the same record in the male category.

“We did it. So overwhelmed and delighted and exhausted all in one – a day I will never forget,” said a delighted Nikki afterwards.

“Thank you to everyone who made today what it was. To Michael for being a legend and coming back to cheer me on after he crossed his finish line. To each and every person on the track today who welcomed me and kept me motivated and shouted ‘keep your leg up.’ Thank you everyone. Especially my family and (boyfriend) Ian Parke who keep me going every day and who believe in me, even when I doubt myself. I am one very happy record breaker. That’s right, I broke a Guinness World Record today.”

Nikki connected with Michael through Instagram as he is an amputee who lost his full leg to cancer in recent years.

Nikki is facing the same surgery and felt they had a lot in common. When she spotted a post on his Instagram announcing that he would attempt the same record as her, she was astonished by the coincidence.

She quickly got in touch with him and after an introductory Skype call they decided to join forces and attempt the record together.

Speaking after Saturday’s record breaker, Michael said: “Nikki Bradley rammed a fast 44 minutes out and together we’re the fastest man and woman on crutches and one leg. What an adventure.”

Michael Robbert is hugely successful in Holland as an athlete and adventurer and has plans to climb Ben Nevis on crutches one month after the record attempt.

This will be a 15 hour trek made more difficult by the 6kg weighted vest he will wear.