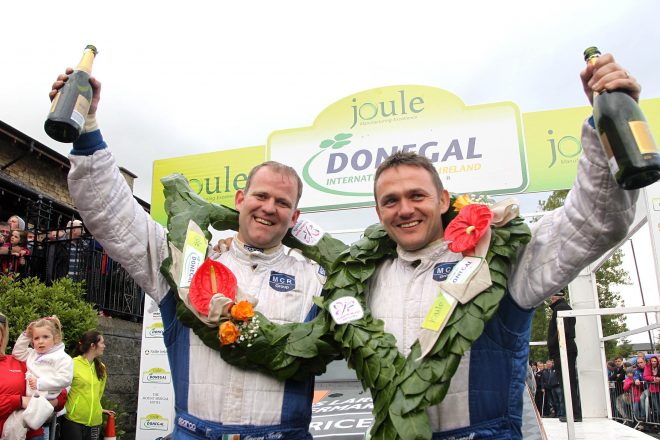 Glenswilly rally driver, Manus Kelly, says he’s really looking forward to competing in this weekend’s Donegal International Rally.
Manus will once again have Donal Barrett on the notes as he aims to give his home rally the best he can in the S12 WRC from Melvyn Evans Motorsport in Wales.
“To be competing with the biggest names in the sport of rallying in Donegal is a dream come true for me,” Manus commented.
“We had a good, clean run in Carlow and it was nice to get the win earlier in the season. But this is a new event and will present a whole new set of challenges,” he added.
“We have had tremendous support from the local businesses and without them, and the great team I have behind me led by Paul Crumlish and Donal Barrett, it would not have been possible to put together a package for the weekend. So we are hoping to give a good account of ourselves will see how things go.”
Manus won the national championship in the Donegal International last year and this was the highlight of his career before the Carlow victory.
“Donegal always attracts a top class field and this year is no exception. Garry Jennings, Donagh Kelly, Declan Boyle and Eugene Donnelly make up the top four, so that gives some indication of the quality in this year’s Donegal. That said, we will give it out best and just see where the car takes us,” Manus added.
SHARE