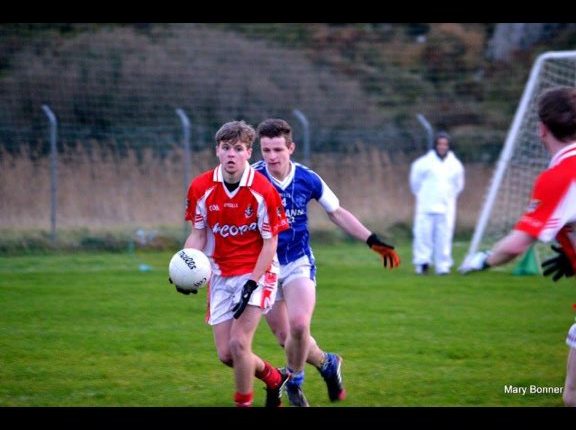 If you were throwing a party and you could invite anyone in the world, dead or alive, who would you ask around? I’d ask Biggie to come for the tunes, and I’d just make a Facebook page “Project Neelys X3” and invite a heap of women for the lads!!

Where do you like to go out to celebrate after a big victory? We usually start off up in Patrick’s, down to O’Hagans and end up in the Bayview ‘til all hours.

What’s the worst pitch you’ve ever played on? Our pitch wouldn’t be the best now but I’d say the Banks is up there with the worst of them.

Which character in any film are you most like? Damo Hanlon always tells me I’m like Denis the Menace!!

Any odd items in your kit bag? Nothing odd, just a lot of tape for my glass ankles.

What’s your preferred brand of gear? O’Neill’s would be my favourite, everybody on the team seems to like the tight fit except Conor and Wherlo!!

Who’s the biggest joker in the team you play for? Ciaran Sharkey enjoys a good joke about at training, and a good doss!!

Which team mate has the best looking other half? Cory when he decides to show up, but I’ll have to give this one to Doalty!

Who is the worst trainer? This would have to be a toss up between the two Greenes and Hugh Martin McCarron!!

Who spends most time in front of the mirror in the dressing room? David McCarron.

Who’s the best/worst person to sit beside on the team bus? We travel in cars, best to travel with the younger lads. We all try to avoid the old heads!!

Who has the best and who has the worst diet on the team, and what does it include? I’d say mine or Ryan Greene’s is the worst – we enjoy a dirty kebab. Gavin Ward and Darren Curran would keep their diet fairly clean.

Toughest opponent you have faced? Paddy McGrath would have to be the toughest.

Best or worst quote you’ve heard, either from a manager, player, opponent? “It’s the cup boys, you could be down 3-1 and end up winning 4-0” – Ben Boyle (beaver).

Best manager you’ve ever played under? I’ve only played for a few managers, it would have to be the oul boy or Tony!!

Best ever performance? I’ve had a few decent performances over my years, few dodgy ones along the way but it would be hard to pick one out.

One to forget? All-Ireland final back in 2014 with the minors would be one to forget!

When you were playing in the back garden, who did you pretend to be? Colm Cooper. He was hard to beat growing up!

If you were in charge of transfers, who’d be in and who’d be out of the team? I’d do a straight swap for Murphy and the Greene machine, let Murphy play off me!!