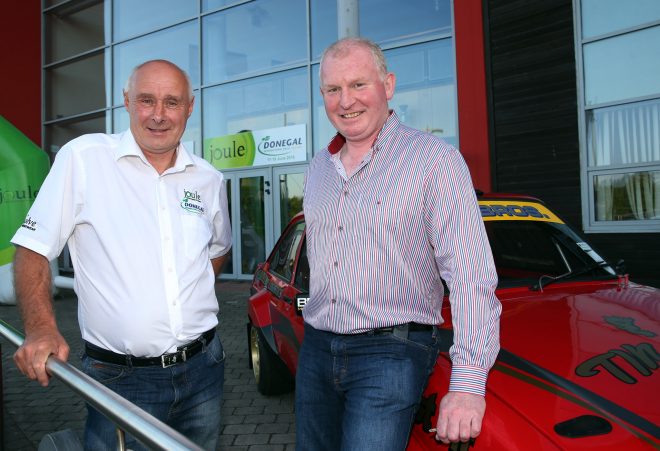 Eamonn McGee and brian Brogan at the launch of this year’s Joule Donegal International Rally.

WHEN Letterkenny builder Brian Brogan took over as Chairman of the Donegal Motor Club in 2014 Ireland’s premier rallying event, the Donegal International Rally, had no headline sponsor.
Topaz, who had sponsored the event for six years, had just confirmed that it would not be renewing its sponsorship beyond the 2013 Rally.
While the news came as a bitter blow to motorsport enthusiasts across Donegal, Brogan and his team refused to let the event, which it is estimated to be worth up to €25m to the local economy, die.
Instead, the 2014 rally came and went without a title sponsor before Joule announced last year that it had agreed to sponsor the event for three years.
“Those were dark days. It was a tough time,” he recalled earlier this week.
“We had no sponsor and it was difficult enough to get things straightened up but one thing that always stood to the club was that we had good members and good support. There mightn’t have been a main sponsor in 2014 but there was a lot of financial support behind the scenes and that continues today,” he said.
A talented rally driver, Brogan had no experience in administration when he took over as DMC chairman.
“I was asked to go straight in as chairman for my sins. I’m a competitor and intend to be for some time to come yet,” he said.
“Listen, it’s worked out well but the Donegal Motor Club is not about one person. There’s a team of thirty plus people constantly working from one end of the year to the next and they don’t miss anything. When you’re vetting things that many times and you’re working through all the safety plans and regulations you don’t tend to miss too much and they miss nothing. From October the year before – once the Harvest Rally is over – it’s straight into the International,” he said.
Since the early seventies, Donegal has enjoyed a reputation as Ireland’s leading rally and over the next three days, the drivers will be battling for every second as it will decide the overall order and class positions.
Friday stages are located in the Letterkenny/ Ballybofey area before Saturday kicks off with the famous Knockalla stage. Then it is on to the Garrygort stage (they repeat these two stages) before the crews tackle stages in the Gartan Lake and Carnhill area, again these stages are repeated, in the afternoon.
Sunday has three of the most famous stage names in Irish Rallying, with crews tackling Glen, Atlantic Drive and Fanad, these stages will be completed twice.
“This weekend showcases what we’re all about here in Donegal but the work that goes on behind the scenes is unbelievable.
“It’s important that we tick all the boxes with insurance the way it is and we’re delighted to be able to assemble the top quality field that we have, especially given the fact that there’s a surcharge of €250 on top of the entry fee this year (€750),” he said.
“There’s no point us boys racing about the roads and expecting marshals to keep an eye on things without giving a wee bit back but I suppose that’s all part of the craic. It’s what we do. If everyone gives a wee bit back to the sport it works that little bit better for one and all,” he said.
Brian has been rallying cars for as long as he cares to remember.
“The first rally I did was back in 1987 but I couldn’t afford to do much after that. I started back in 2003 and haven’t looked back since,” he smiled.
While Brian and his co-driver Damien McGettigan hope to spend the entire weekend rallying he leaves behind a very experienced man at the helm in Eamon McGee.
“We’ll be giving it hell for leather but Eamon and his team are more than capable of running a great show. If I’m still in the rally come Sunday afternoon I’ll be a happy man,” he said.
Brian and Damien won the National event of the West Cork rally back in March when they brought their Mk2 Escort home just 6.3 seconds ahead of Alan Ring in a Fiesta.
It was a first win on the Tarmac Championship for McGettigan, while it was Brogan’s second success after his victory in Galway in 2007.
“We’re in the national shake up and hope to do alright this weekend,” he said.