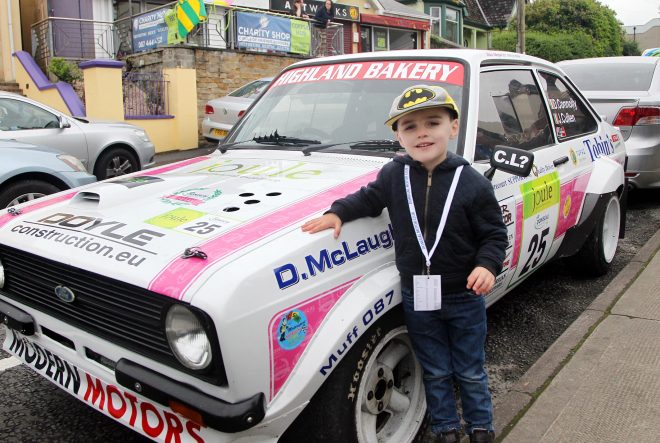 Logan O’Connor, pictured with James Cullen’s car at the start of the rally.

TODAY sees action centred in Milford Mart with stages such as Knockalla, Garrygort, Carnhill and Gartan Lake to whet the appetite for rally enthusiasts.
Last year’s winners Garry Jennings and Rory Kennedy were the first major casulties on day one as they suffered rally ending engine maladies at the end of SS1. Declan and Brian Boyle in their Fiesta WRC gained the upper hand on the timesheets on stage one timesheets.
On SS2 Donagh Kelly and Conor Foley in the Focus WRC gained the upper-hand and took pole position on the leader board. The Boyle cousins took the lead back on SS3 and have remained there throughout the second loop, finishing the day 6.2secs ahead of Kelly and Foley. Manus Kelly and Donall Barrett settled well in their hired Subaru S12b and hold a comfortable third just under 20 seconds behind Boyle.
Alastair Fisher and Gordon Noble were slow to settle in the first loop, but increased the pace and benefitted from others misfortune to claim the overnight lead in the R5 class, Sam Moffett and Karl Atkinson are only 0.8 seconds back in second with Josh Moffett and John Rowan just over 11 seconds back in 3rd.
In the National Section Donegal Motor Club chairman Brian Brogan and Damien McGettigan hold the overnight lead by 7.1secs from Damien Tourish and Domhnall McAlaney both in MKII Escorts. Donegal’s Fastest Milkman Declan Gallagher is settling back into the groove and has ended the day just 8.8secs back in 3rd. 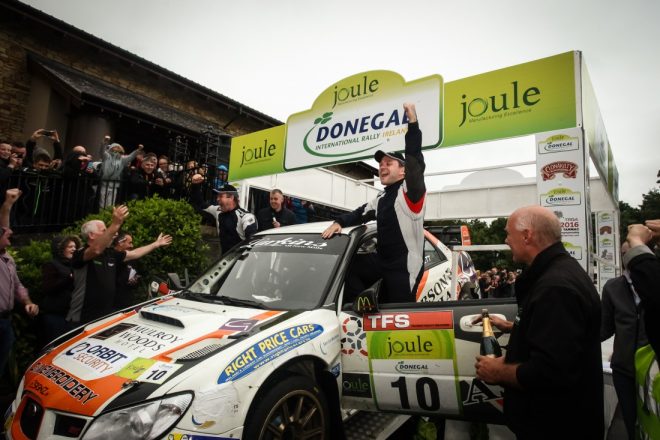 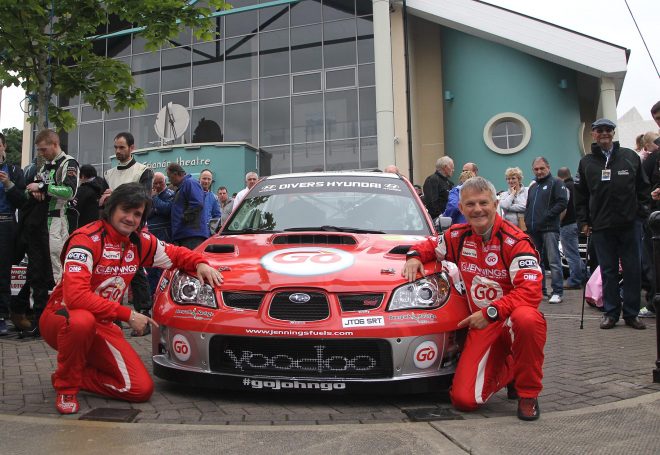 THE revs from the engines have started as battle gets underway in the 45th staging of the Donegal International...