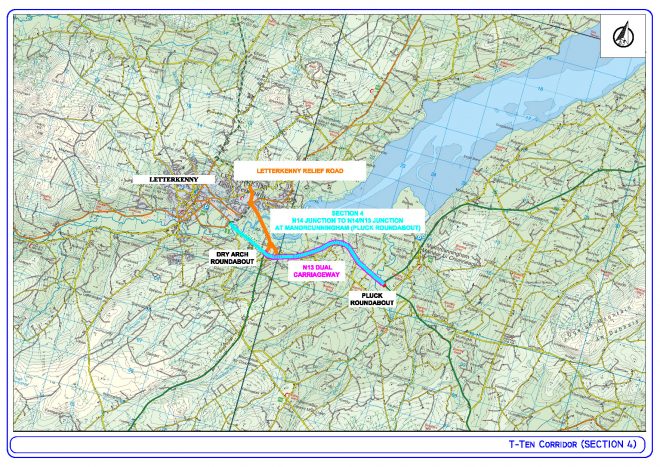 FOLLOWING the construction of the A5 through Northern Ireland to Derry, which will improve access to Donegal, a further €200 million will still be needed to improve other major road infrastructure ‘deficits’ in the county it has emerged.
While the completed A5 will provide two main linkages to the roads infrastructure in Donegal at Strabane and Derry, there remains a significant body of work to be done to enable the full benefits to be realised here.
Details of the proposed works are contained in the Trans-European Transport Network Corridor Needs Study – Donegal which has recently been completed by Halcrow Barry Consulting Engineers on behalf of Donegal County Council.
The report notes that the link between Letterkenny and, by extension substantial parts of North and West Donegal, requires substantial realignment and involves the development of three major improvement projects.
These are the N56/N14 Letterkenny Relief Road (including provision of a grade separated junction on the N14 Dual Carriageway Section), estimated cost €46 million; Manorcunningham Roundabout to Strabane at an estimated cost of €106.5 m and the Ballybofey /Stranorlar Bypass at an estimated cost €42m.
€500,000
An allocation of €500,000 has been provided by TII to Donegal County Council in 2016 to progress these three schemes.
According to a spokesman for the Department of Transport it is intended to procure Engineering Consultants and commence planning and design activities on the schemes this year.
“It should also be noted that works at Kiltoy Roundabout which is on the proposed Letterkenny Relief road are due to commence this year. These works are being prioritised to facilitate expansion at the Letterkenny Business park and have been allocated the amount of €1 million in the current year,” he said.
Last week, Donegal Sinn Féin Senator Pádraig Mac Lochlainn expressed his outrage at news that the Bonagee Link Road, vital to addressing Letterkenny’s regular traffic gridlock, had not been included in the government’s capital plan for 2016 -2021.
“I am outraged at this confirmation on behalf of the Minister. How can the government state that they are serious about “balanced regional development” while ignoring this road project that is vital to addressing the regular traffic gridlock in our county’s gateway town?
“I have repeatedly raised the need to build this vital link road connecting the Business Park Road to the Dry Arch roundabout over recent years since Donegal County Council completed their design and preparation works,” Senator MacLochlainn said.
In last Friday’s edition of the Donegal News, Mr John McLaughlin, Director of Roads, Donegal County Council, confirmed that the Council continues to work behind the scenes to progress the three sections of the TEN-T route in Donegal as well as the proposed Bonagee Link Road.
“Consultants have been appointed to look at all four of these projects and they will recommend the way forward. After that, we’ll know better if we can proceed with one major package or as individual projects. Given current land prices and construction prices, it should be a lot more favourable compared to a number of years ago,” Mr McLaughlin said.
“It will be the single biggest capital project ever undertaken by the county,” Mr McLaughlin added.
Minister McHugh said he had “no doubt” that money will come to help fund the road projects.
“I know that the Council is very keen to progress all four of these major projects and that’s the way we should all go – working as one for the betterment of Donegal,” Minister McHugh said.
“The fact that this project is not included in the current National Roads Programme does not mean it’s been kicked into touch. I simply don’t accept that,” he added.