A DONEGAL woman appointed as President of the Irish Nursing Midwives Organisation (INMO) has vowed to campaign for additional beds, staff and services across the healthcare system.

Martina Harkin-Kelly, who is originally from Glenmaquin, was appointed to her role earlier this week and will serve as INMO President until 2018.

With over 30 years’ experience as a nurse, Mrs Harkin-Kelly is a specialist co-ordinator and nurse educator, CNME Sligo/Leitrim and West Cavan, HSE West, Sligo.

Having qualified as a registered general nurse (RGN) in Sligo – where she now lives – she then went on to work in London for a time. The local woman has completed an ophthalmic nursing diploma and a clinical teaching course and holds a BA (Hons) degree in economics and sociology, and a research MA in humanities.

Further to this, Mrs Harkin-Kelly has worked in the School of Nursing in Sligo General Hospital as an acting clinical teacher and acting nurse tutor. She is the current Sligo Branch chairperson and is a serving Education Section member. This is her second term on Executive Council.

However, despite her tenure and undeniable knowledge in the field, she has joined the Presidential ranks of the INMO at what she admits is a “very critical time” for nursing both locally and throughout the country. She takes over the helm at a time in the Irish public health service, where nurses and midwives, have, over the last number of years, suffered a pay reduction of up to 16 percent, the loss of 5,200 posts and an increase in working hours, all of which have led to a crisis in recruitment and retention. Delegates at the Annual Delegate Conference last week called for pay restoration and a 37 hour working week in line with all other professional health service staff.

Speaking to the Donegal News following her official appointment, the mother-of-one said she was “delighted” and has pledged to “do my level best for all nurses, be a voice for them and enable them”.

She said: “I speak with truth and people acknowledge honesty. Honesty is a game changer, we saw that with some of the politicians in the last general election who were dealt with the ramifications of what happens when you are not straight up with people.

“The job I have to do might not be easy; there are 38,000 nurses in the Union I represent, but I am a realist. I, like many others in this country, have lived through two recessions in my lifetime. As a child I remember rural schools coming under the hammer as a result of the recession, and in 2008 this country witnessed large numbers of people emigrating to other countries as the result of the bust; the effects of which we are still reeling from. I believe everything is cyclical.”

Perhaps as impressive as Mrs Harkin-Kelly’s career is, so to is her personal life. A twin to sister, Carmel Curran, and the youngest in a family of six, incredibly all her other siblings also work in the nursing profession.

After attending Glenmaquin National School, Mrs Harkin-Kelly went on to St Brigid’s in Convoy and later became a student at the Loreto Convent in Letterkenny.
She married her husband, Alan, from Sligo, in 1990 and the couple have a son, Robbie, who is currently studying in Ballyshannon.

Asked of why she initially got involved with union representation, Mrs Harkin-Kelly said: “I am nursing 33 years but 16 years ago I got involved in nurse representation for my union. There was a hierarchy in the medical profession and I think for a long time the role of a nurse was underplayed, however, a nurse is actually an advanced clinician and the linchpin for all health care professionals. The word always associated with a nurse was caring, which is true, however, nurses are also competent and so much more.

“I remember the nurses strike in Ireland in October 19,1999, when more than 27,0000 nurses went on strike, which lasted for nine days. I remember how morale had been so low and how it is low in the public service today because of increased work pressures and cuts to resources.

“People have vilified the public service but it’s worth remembering that nurses often can’t even afford their own rent. Those who work in the public service have been scrutinised but public servants have been faced with a wave of cuts. Nurses have been leaving this country to seek employment elsewhere. We need to ensure we keep our excellent nurse force here. We can’t afford to lose their skill and talent.”

Asked of what she thought of Government proposals to ‘dismantle’ the Health Service Executive (HSE) in favour of another body, Mrs Harkin-Kelly said she was ‘cautious’.

“We need to know what we will be moving to, if that should happen. We need to ensure recruitment and retention, and the public need to be involved.”
Continuing, she outlined a few things she intends to drive forward in her new role including a National Health Summit involving all stakeholders and zero tolerance of verbal or physical abuse of staff in all care settings.

“I want to deconstruct and then reconstruct and increase confidence in our service. I also want to increase the confidence of nurses. Someone needs to fight this and I am up for the challenge. We talk about the economics of obesity which has a psychological slant, but we don’t talk about the fact we have an ageing population, which is a societal slant. In 2046 there will be 108 million people over the age of 65 in Ireland alone and that will bring with it its own quagmire of problems if we don’t have a better system in place. I believe Irish society has been polarised and this needs to change.

“There is currently an overwhelming feeling of disquiet among members due to their pay and conditions. Not only can we not recruit nurses and midwives from abroad, we are losing members who have many years of experience on the front-line. This is due to the ongoing impact of wage restraint where members find the cost of living extremely difficult to manage. The cost of renting a house or apartment has increased enormously and the cost of buying a house is now out of reach for most public servants.”

Mrs Harkin-Kelly said her family are “over the moon” for her, adding that in the week she was appointed to her new role, her family were also remembering their “wonderful sister”, Kathleen, who passed away 14 years ago with bowel cancer.

“Known as Lena, she was a psychiatric nurse at St Conal’s Hospital. She had a beautiful sprit and a beautiful soul, and I just know she would be so proud.” 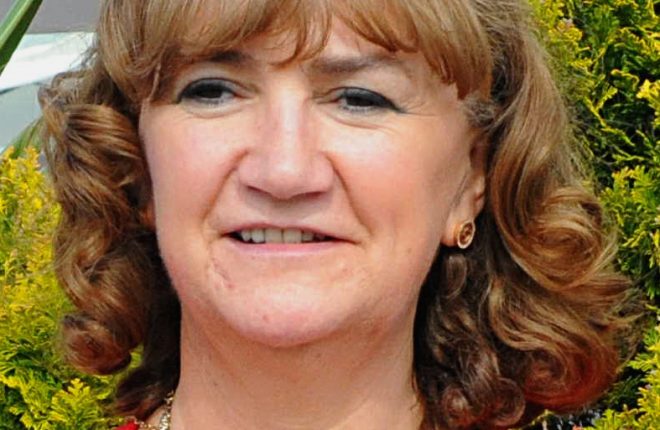 Mrs Martina Harkin-Kelly, who is the new President of the Irish Nurses and Midwives Organisation (INMO)