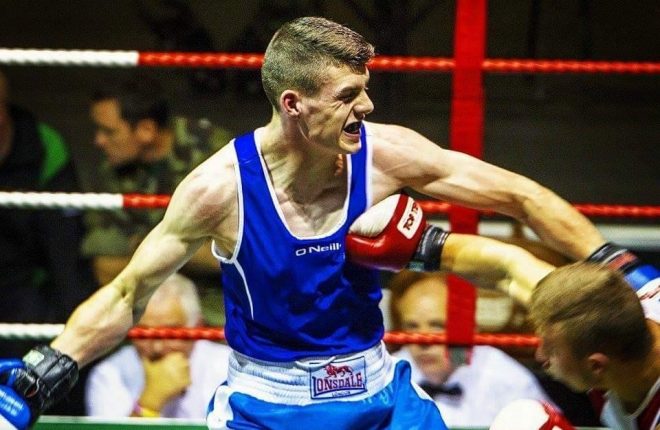 If you were throwing a party and you could invite anyone in the world, dead or alive, who would you ask around? Hugh Heffner, I bet you that man could show you how to party!

Where do you like to go out to celebrate after a big victory? Always head out to the local, Breen’s bar in Convoy to celebrate. Always guaranteed a free pint after a victory!

What’s the worst venue you’ve ever fought in? Can’t say I’ve fought in any bad venues now, would just have to be the ones with no bar in them!

Any odd items in your kit bag? The weirdest thing i have in my kit bag would have to be a set of ear plugs. This is because if were down in Dublin boxing for the weekend you will not get a wink of sleep because of the snoring from our coach Dominic!!

What’s your preferred brand of gear? Either Adidas or O’Neill’s

Who’s the biggest joker in the club you fight for? Mark Laverty, he doesn’t turn up to training often but when he does your guaranteed a good oul laugh at some of the stories he comes out with.

Which clubmate has the best looking other half? This is an easy one, it has to be the club treasurer Joe Morris. She’s a real stunner.

Who is the worst trainer? They’ll not like me for this one but i have to say either Keelan Gillen or Kevin McNamee, they do more posing than boxing!

Toughest opponent you have faced? Faced a lot of tough opponents in my career, my toughest was probably against a Welsh lad when they came over to fight our Donegal team a good few years ago.

Best or worst quote you’ve heard, either from a coach, supporter, or opponent? Heard my mother shout “Keep your hands up and don’t let him hit you” when she came to watch one of my first fights. Best advice I think she’s ever given me haha.

Best coach you’ve ever had? All the coaches at the club are brilliant but I have to give it to Domsay and Eddy McCafferty. They’ve been there since I walked into the club at 10 years old. They put some time and commitment into every one of the boxers in the club and they cant be thanked enough for what they do!

Best ever performance? Had a number of good performances in my career, one of my most recent was my win over Zack Deluca, a Boston native who travelled to face me in a Donegal V Boston select last month.

One to forget? My semi-final in the intermediate All-Irelands when the doctor prematurely called a stop to the fight due to a small cut to the eye caused by a clash of heads. I think i would have went all the way and won the title had it not been for that.

When you were playing as a youngster, who did you pretend to be? At training I would have looked up to the more senior boxers in the club, our Olympic athletes and even Jason Quigley.

Sporting ambition? To continue fighting and enjoying the sport, and hopefully get the chance to box for an Irish Senior medal some day.