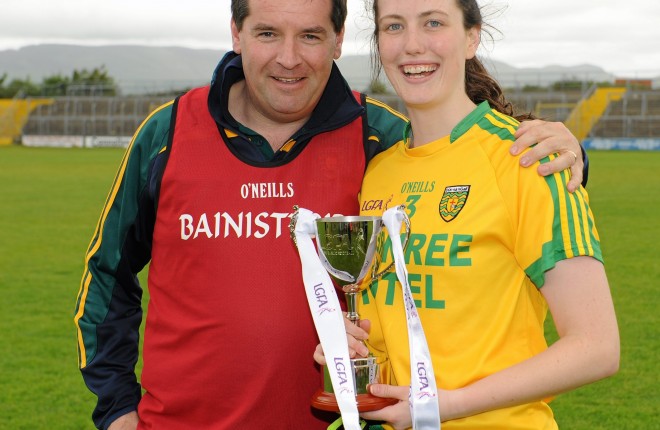 Donegal’s Emer Gallagher with former manager Davy McLaughlin. She will be chasing more silverware this weekend

Donegal Senior Ladies have one game standing between them and Division one football next year. This Saturday, the ladies take on Westmeath in the Lidl National League Final at Parnell Park, Dublin throw in at 5:30pm. A win on Saturday secures a league win and promotion for Michael Naughton’s side.

The ladies defeated Cavan 0-13 to 0-6 to reach this weekend’s final. After suffering a defeat to Armagh in last year’s league final, Donegal’s full-back Emer Gallagher is determined not to have a repeat of last year.

“So far the season has gone very well for us. We have set our goals and so far have achieved what we wanted to achieve. The important thing for us now is that we don’t fall at the final hurdle, after all the hard work we’ve put in so far. For us, a win this weekend is the only option. We were in the exact same position last year and we don’t want a repeat of that. We know as a team we are division one standard and we want to be competing with the best teams in Ireland next year.” said Gallagher.

Donegal ladies have had a dream season so far having won seven out of seven games. Michael Naughton will be hoping that his team will continue this unbeaten run in Dublin this Saturday. Having worked hard all year, Gallagher believes their successful league campaign is down to team work and a drive to succeed.

“It’s simply down to hard-work, dedication and not taking any team or game for granted. We all had great belief coming into this year that we would have a good league campaign. After the hurt everyone felt after last year’s league final, we knew that we wanted another crack at it! One of our strengths is the team unit we are and play as. Our team is also completely diverse and I would not like to be in the manager’s position in picking the team for Saturday.”

While the Donegal Ladies are going to do all they can on the pitch this Saturday, Gallagher is hoping that supporters will attend the game to encourage and support the ladies as they challenge for the league title and that important ticket into Division one football for 2017.

“To have a big following for the final would mean a lot to all the girls. I think many people have a sort of stereotypical opinion of women’s football. I say don’t knock it until you have seen it! When you see the likes of Geraldine McLaughlin, Yvonne McMonagle and Niamh Hegarty taking points the way they do, no one can doubt it is a great standard of football to watch.”