Rarely do you attend a GAA match, and not hear someone criticise the performance of the referee.

We’re all guilty of it, including myself, and abject displays from officials are often discussed in this column.

They are the people we love to hate, but without referees, there would be no games.

At present, we have a shortage of referees in Donegal and it is an issue that we need to address immediately.

We only have around 45 active referees in the county at the moment, and that is nowhere near enough. It is a serious problem.

Between senior and reserve games, there could be between 35 and 40 adult games every week.

Some weeks those games are evenly spread over the weekend, with Division 3 and 4 games mostly taking place on Saturday, with the majority of games in the top two tiers of the All County League on Sunday.

That means the referees can double up occasionally, however, this weekend, there are 33 games on Saturday night, with just three set to take place on Sunday.

That leaves the referees very stretched, and that is before you take into consideration officials who may be injured or unavailable for some reason.

It is not just at adult level that we are experiencing the problem.

We have a full fixture list of underage games in both the Southern and Northern Minor Boards during week, and we are struggling to get referees to cover all the games.

This week, two under 12 games were postponed because there was no referee available to officiate.

Those young boys and girls have been waiting anxiously since last summer for an opportunity to put on their club shirt again and they were left disappointed when they had no game.

They have been playing soccer, and basketball, and other games during the winter months, and they will be pushed towards those sports if they can’t play GAA.

There is a real problem in the Glenties and Rosses area, where there are only two active referees at present.

I must make it clear that the current panel of referees are not to blame here. They are doing everything they can, but there’s only so much they can do.

There are people behind the scenes that are doing great work to try and rectify this situation, but they need more support.

Clubs need to do everything that can to try and encourage people to take up refereeing. 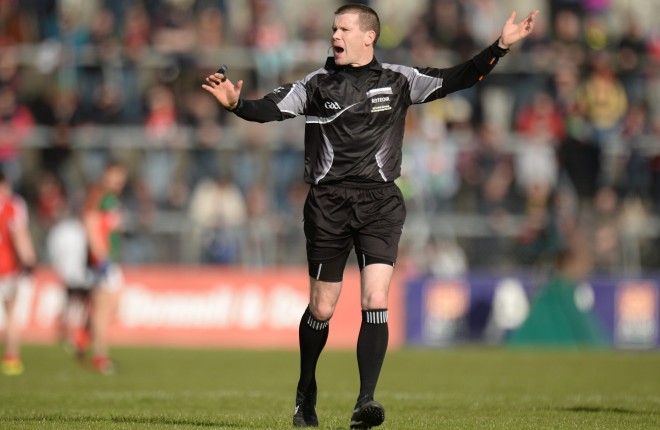 There are a number of courses on over the next few weeks, and we need to get people to go to them, otherwise more and more under 12s are going to miss out on their football.

We can’t afford to underestimate the seriousness of this issue.

The Michael Murphy Sports & Leisure Donegal Club Championships were launched on Wednesday night, and it will be an exciting fortnight for Senior and Intermediate clubs in the county.

They will all be looking forward to their first big outing of the year, and they know that a win will leave them in a healthy position for later in the season, when the Club Championship resumes when the Donegal senior team’s interest comes to a conclusion.

The one good thing about our format is that at least every club will still be in the mix after the first round of fixtures, even if they lose.

The first round of Dublin Championship fixtures were played last week, and with no back door, 16 clubs saw their championship action come to an end before the start of May, which is absolutely ridiculous.

It is early in the season, and a lot could change over the next couple of months, but the three teams leading the way at the moment are Kilcar, St Eunan’s and Gaoth Dobhair, and I think one of them will land the Dr Maguire Cup.

I know I have excluded reigning champions Naomh Conaill from that list, but it is very hard to defend the title.

They could come back and prove me wrong, but a lot of their players are struggling with niggles at the moment arising from a long 2015 campaign, and they don’t generally clear up too easily.
The championship starts with a bang with St Eunan’s and Kilcar set to go to battle on Sunday week.

That should be a real humdinger of a match, and neither side will want to come out on the losing side.

We have a full round of All County League fixtures this week, and I’d imagine there will be a few shadow teams lining out, as no-one will want to show their hand, especially as spies could be floating about!

It was hard not to feel sorry for the Cork under 21 goalkeeper Anthony Casey last week, as he gifted Mayo a goal that saw them go on and land the All-Ireland Under 21 crown in Ennis.

The role of a goalkeeper is a lonely one, and they can’t afford to make errors.

If you make a mistake out in the middle of the field, there’s a good chance someone will back you up, but the goalkeeper is the last line of defence, and there is no-one left to save him.

It’s tough on Casey, but goalkeepers have made mistakes before and come back stronger for it, our own Paul Durcan is a prime example.

It was another great game in the Under 21 championship, and it beggars belief that we are making drastic changes to one of our most exciting competitions.

You have to give great credit to Mayo. They looked dead and buried in the Connacht Final and the All-Ireland semi-final and came back to edge through on both occasions.

There were periods last week when they were really struggling, but they managed to grind their way back into things again.

They got the rub of the green at times, but you make your own luck in sport. 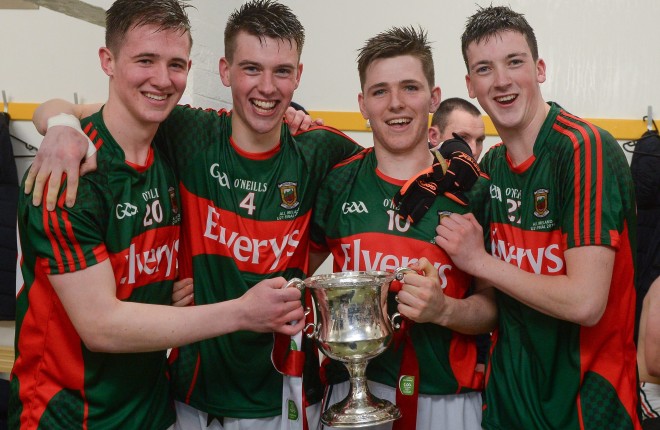 30 April 2016; Mayo players celebrate after winning the All-Ireland Under 21 Championship. Can they push on and win one at senior grade? Picture credit: Piaras Ó Mídheach / SPORTSFILE

The big question is can this crop of talented youngsters push Mayo over the line at senior level?

They certainly have a lot of quality players, and they have strong, powerful players coming through.

Diarmuid O’Connor has already made the step up, and the likes of Matthew Ruane, Stephen Coen, and Conor Loftus look capable of doing likewise.

It will be interesting to see if Stephen Rochford opts to give some of those players an opportunity to impress in the Connacht Championship.

It has not been a good week for the Donegal Ladies manager Michael Naughton and his team, but hopefully they will have something to smile about after the Division 2 Final on Saturday.

Three of Naughton’s players got injured playing in the Gaeltacht Finals at the weekend, and are like to miss the league decider.

Can you imagine the uproar if this was the men’s team before one of their most important games of the season?

It’s a shambles and it leaves the ladies with a real uphill battle against Westmeath on Saturday.

We wish the injured girls a speedy recovery, and hopefully their team-mates will bring some silverware back to the county this weekend.