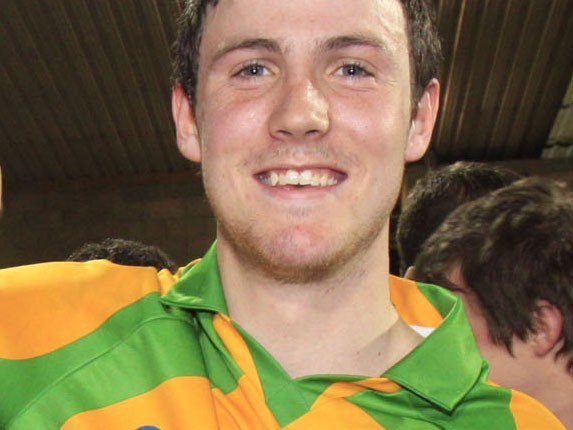 It might be two weeks until Donegal begin their Ulster campaign, but one former county player is beginning his championship season this weekend.

Antoin McFadden – a brother of Colm – was part of the Donegal panel that won the All-Ireland back in 2012.

He has since dropped off the squad, but the commencement of a Masters degree at the University of Limerick has opened a new door for the Creeslough man.

He is now the Strength and Conditioning coach for the Limerick senior footballers under the guidance of John Brudair, and they make their championship bow when they face Clare in the Gaelic Grounds this Sunday.

He admits that it is an unlikely link-up and it all came about by chance.

“I went down to do a Masters in February 2015, and I played for the UL Sigerson team.

“I was helping out a bit with the defence and things like that, and one of the Limerick senior lads Cian Sheehan got me to go out to Newcastle West to do a bit of coaching.

“Newcastle West went on to win the Limerick Championship, and that got my name out there.

“John rang me and asked me to come on board, and I was delighted to.”

McFadden has enjoyed his involvement with the team, but they struggled during the spring, and only picked up one point from seven games in the league as they were relegated to Division 4.

In contrast, Clare have started the season superbly and caused a shock by beating Kildare to win the Division 3 league.

The form guide would suggest an away win this week, but McFadden thinks his team come into the game in a good place.

“It’s been absolutely brilliant and things couldn’t have gone much better from my side of things.

“Unfortunately things haven’t gone so well for the team and they have had a few disappointing results.

“But the lads are working hard and I think they come into the game in a good place.

“Clare have been put a pedestal now, whereas there’s nothing really expected of our lads.”

McFadden has stepped in as manager of Newcastle West this year, and they have made a steady start to the season.

After enjoying a successful period while at college in DCU, and experiencing what it was like to be in the Donegal dressing groom under his brother-in-law, Jim McGuinness, McFadden feels well-versed on what it takes to create a winning environment.

“I think that I have seen enough to know what works and what doesn’t work.

“Being involved with Newcastle West was also a massive experience for me. It was really positive and I’m actually training the team this year.

“Between Newcastle and Limerick, I’m working nearly every day of the week at the minute.”

McFadden lined out with local club St Michael’s until this year when he transferred to Clare club Cratloe.

Clare manager Colm Collins is now his club bainisteoir, but McFadden will be plotting his downfall this weekend in the Gaelic Grounds.

“I signed up with Cratloe there about five or six weeks ago, and I played my first game three weeks ago.

“They are one of the strongest clubs in Clare and the county manager Colm Collins is actually managing them as well.

“I met with him and he seems to be a good man, but I don’t think he’ll be giving much away ahead of Sunday.”