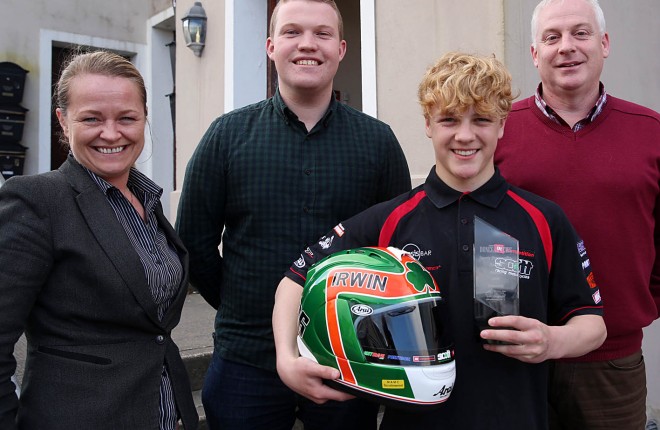 KILMACRENNAN motorcycle racer Rhys Irwin made history in March when he became only the third Irishman ever to win a British Superteens Championship race.

Irwin was 13-years-old when he came out on top during the first meeting of the British Aprilia Superteens at Brands Hatch.

The Loreto Community School, Milford student was determined to show that was no-one off and he claimed another victory at the second meeting of the year at the Donington International Race Circuit four weeks later.

“It’s something to be really proud of because there are so few Irish riders who have done it,” said Rhys this week, as he picked up his Sports Personality of the Month award for March.

“It is years since an Irish person won one, and then for me to go and win two races is brilliant. It shows it was no fluke.

“In every race meeting, you have four races. But there’s qualifying and warm-ups as well, so it does be a long weekend of racing.

“But I enjoy it and I love competing.”

After excelling at Motorcross events in Ireland and Britain, Rhys made the decision to switch to Short Circuit Racing last year, and signed up with Scott Racing Limited, who supply his bike.

Rhys was the star turn when he competed in Ireland, but it is a different story when he takes on the field at the British Superteens Championships.

He could encounter up to 25 competitors in a race, and with the entrants fee standing at €800, it’s safe to assume that it is the cream of the crop who are partaking.

“The competition is really tough over there.

“You could be second and mess up one corner and be back to sixth or seventh. It’s hard to climb up again then.

“It’s really, really close and everyone is trying to stay on top of each other.”

The British Superteens Championship is steeped in tradition, and it is a competition that is revered throughout the world.

Two-time Moto GP champion Casey Stoner learned his trade through the Superteens, as have some of the best riders currently at the top level.

Rhys’ older brother Caolan (18) is also a talented motorcycle racer and he too travels across the Irish Sea to compete.

He is competing in both the 450cc RRV Aprilia Championship and the Supertwin 650cc Championship this season, and while Rhys says they have a bit of a rivalry, he admits that he looks up to his older sibling.

“We’re brothers so there’s always a bit of competition.

“But he helps me more than anybody and it’s nice to have him there.

“He’s so fast and good on the bike and he can pick up things quicker than me because he’s older and more experienced.

“I can ask him things and he will always give me honest advice.”

Rhys’ father Ivan was a motorcycle rider in his day, and works as a mechanic on bikes.

It was from there that Rhys’ love of the sport developed and he received his first bike when aged three, and won his first race as a six-year-old at the Gortnavern MX track.

“I was always around bikes with dad working on them as well. The bike was always there for me to ride, and I loved riding it.

“I was riding about in the field and in the garden, but you couldn’t race until you were six.

“I turned six on a Thursday and I had my first race that next Sunday.”

As he started to get older, the more time he spent on the bike meant he picked up more injuries. He broke both wrists and both collar bones, and while it does take some time to get comfortable again on the bike after an injury, Rhys was never put off.

However, he switched to Short Circuit Racing last year and while the speed involved is greater, there is less chance of getting a serious injury.

“I’m happy with the decision. I always enjoyed road racing and when Caolan went and started doing well in it, it sort of encouraged me to try it out. I got the offer then to go and race in England and I couldn’t turn it down.”

It took almost €150,000 to cover the cost of running the brothers’ racing in 2015, and while Scott Racing are of great assistance, there is commitment from the family to bring some money to the table.

James Gallagher of Oasis Bar, has supported both brothers since they were starting out over ten years ago, and without his loyal support, neither would be where they are today.

With good people generously donating money to help him out, Rhys is determined to get in the best possible shape to maximise his potential.

The second-year student also praises his school for the support they give him and Caolan, who is currently preparing for his Leaving Certificate.

The brothers sometimes have to leave for race meetings on a Thursday or Friday, and may not make it back in time for school on Monday.

However, the school are more than helpful when it comes to providing them with catch-up notes, while some teachers have endeared themselves to the family even further by staying back after school to do work with Caolan, as he gets ready for his exams.

Rhys admits that he counts down the days between race meetings, and he says motorcycle racing is his life.

“Everything sort of revolves around my racing: the boxing, the rugby club, and my school work.

“The school are very supportive of me and they try to give us every chance to combine the two.”

Rhys states that his dream is to ride in the Moto GP but he acknowledges that only a small percentage of riders get to follow through with that goal.

The level-headed boy, who recently celebrated his 14th birthday, is taking his career step-by-step, and this weekend he heads for Snetterton for the third meeting of the year, and he wants to continue his good form.

“I have to finish every race – I can’t crash. After that it’s all about getting on the podium and trying to win.