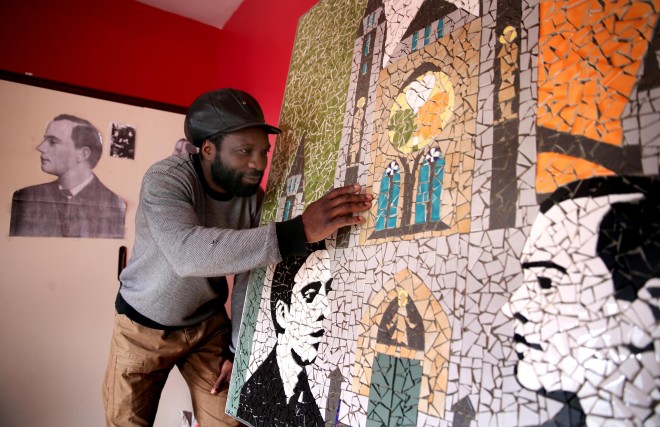 Mocola Vonga puts the finishing touches to his 1916 Centenary mosaic.

THE connection between the Dublin firm of James Pearse and Sons – founded by the father of rebel leader Pádraig Pearse – and Letterkenny will be the subject of a lecture in St Eunan’s Cathedral this evening, Friday.
The sculptor William (Willie) Pearse, with some help from his more famous older brother, spent time working on the pulpit and altar rails in the Cathedral during its construction at the turn of the last century.
As part of the evening a specially commissioned mosaic picture of the Pearse brothers will also be unveiled.
The mosaic, which depicts the two brothers with the Cathedral in the background, is the work of Mocola Vonga.
The Angolan native made Letterkenny his home six years ago and he lives in Sallaghagrane with his partner Barbara O’Donnell from Churchill, their two sons, Fela Tambu and Sean and daughter Keta.
“This is my chance to play my little part in commemorating 1916 as an Irish citizen. I won’t be around in one hundred years time but hopefully my work will still be displayed for the people of Donegal to see.
“I used tiles from Donegal Tiles and I’ve used the tri-colour as the background while there are shamrocks in through the design. It took about a week to put together and, hopefully, it will go on permanent display in the museum or in the Council offices after it has been unveiled on Friday night,” he said.
The pulpit of the Four Masters was largely paid for by the National Teachers of Donegal. In the main, Sicilian marble was used, with ten statues in total; the Five Masters (for there were four plus one), the Four Evangelists (Matthew, Mark, Luke and John), and Isaias the Prophet.
The altar rails, comprising 23 columns, contain discreet symbols of the Passion (the hammer and pliers, the ladders, the sponge and lance, the cock, the scourges, three dice etc) which adorn the panels.
Mr Brian Crowley, curator of the Pearse Museum and St Enda’s Park in Dublin, will deliver tonight’s lecture with gets underway at 8pm.