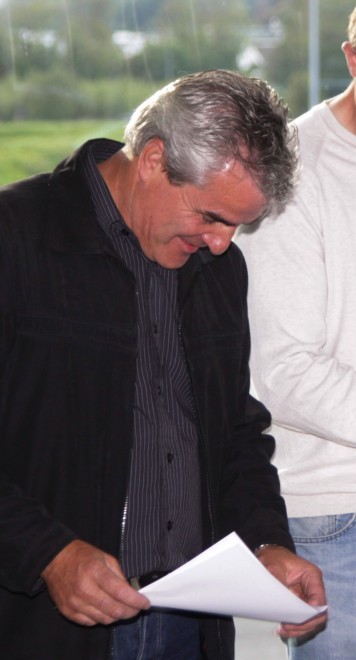 INSURANCE protection will have to be put in place and legal documents signed before car enthusiasts will be allowed to use a stock car track in Gweedore.
That’s the stark message issued this week by Eugene Ferry, who operates Hilltop Raceway in Glenhola with his son Clint and PJ Bonner.
Mr Ferry was responding to a report in last week’s Donegal News which said that a concrete diffing area, which had been broken using a rock hammer earlier this year, was to be re-instated in the coming weeks.
According to local Sinn Féin Councillor John Seamais O Fearraigh, calm had been restored between the owners of the track and a new committee put in place to operate the facility after sections of the track were dug up last February.
However, Mr Ferry said that matters were “far from sorted”.
Speaking to this paper from the Shetland Islands on Tuesday, Mr Ferry admitted that he was the man who had taken the rock hammer to the track.
“It was a drastic step – I admit that. A lot of money, time and effort had been put into developing that track but I had been left with no choice,” he claimed.
“Over a number of years we had a stock car club – one which we ran in a professional manner – in Gweedore until we had an insurance claim after a girl fell. Our (insurance) premium then went through the roof and with the recession at the time (2008) it wasn’t viable to keep the track in operation, so we closed it,” he said.
Gates were closed, locked and then the track was safely secured.
He continued: “PJ Bonner and me created this track back in 1989 and when you create something you’re held liable for it. That was the advice from my solicitor so that’s why I closed the track to the public when I did.
“We closed it off and secured it with gates and locks but we did offer them (car enthusiasts) the facility to collect keys from my son to use the track as long as they signed disclaimers. No disclaimers were filled in so the keys were taken back off them again.”
Mr Ferry said that, unfortunately, there were a number of subsequent break-ins and because it is located a mile off the main Gweedore to Gortahork road the track been very hard to police. After those incidents, he took off the gates and used a digger to build up an embankment at the entrance to keep people out. However, someone re-opened it again.
“By that stage I’d had enough and I was left with little option but to rip up the diffing area a few months ago and re-seal the perimeter once more,” he said.
“Listen, we gave the old committee €5,000 to take it over in 2007 and it cost us €10,000 to put in the concrete diffing area. We ran it for two years until there was an insurance claim. I’m from a motorsports background and have rallied for over thirty years. I know the dangers of the sport and the need to have adequate insurance in place. A number of boys said they were willing to take it over, yet no one is prepared to say that they’ll be responsible should things go wrong and my name is still listed as the owner of the track.”
He explained that the men who wished to take over the running of the track formed a new committee – Gweedore Stock Car Club – and they sought a meeting with his group, and the track’s owners, Hilltop Raceway.
“They asked us to attend a meeting but we didn’t want to get into a public slagging match so we contacted our solicitor, Sean Cannon in Gortahork, who drafted a letter explaining how they could gain access and have responsibility for the track. That letter was read out at that first meeting and I’m led to believe that they verbally agreed to the undertakings, but they have yet to sign the prepared document,” Mr Ferry said.
“Who is responsible if, God forbid, some young lad gets killed or seriously injured? They claim that the area in question is commonage and, as a result, belongs to the townland and its people but that’s where they are one hundred per cent wrong. If necessary, I’m prepared to take further steps to make sure that it’s done by the book,” concluded Mr Ferry.
When contacted on Tuesday afternoon, Mr Danny McCauley, chairman of the Gweedore Stock Car Club, said there will still hopeful that concrete will be laid on the damaged parts of the track in the coming weeks.
“He (Mr Ferry) says that he owns the track but it’s on commonage, while we’re looking into the insurance side of things,” Mr McCauley said.