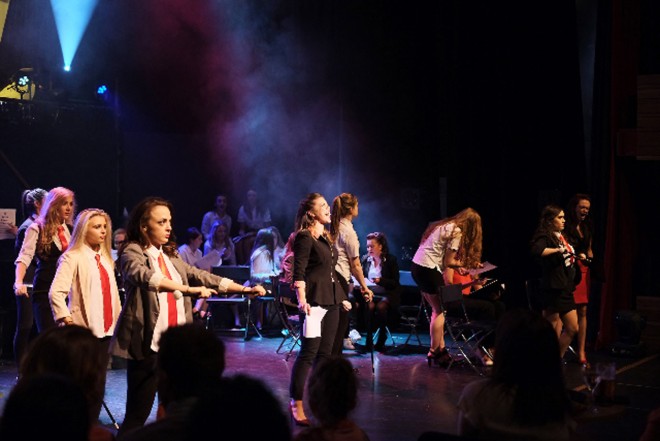 Christina McBeth as Casey Carson puts on a brilliant performance in Gutz, the first ever musical by David Oliver.

The original production, which took the north west by storm last year during a sell-out run in Strabane and Derry, will run on Friday and Saturday night before it hits the bright lights of Belfast and Dublin.

It features a ten-piece live band, 25 original songs and a cast of more than 40 that comes from Donegal, Tyrone and Derry.

The original script and score depicts a young woman’s journey in New York City as she battles work/life pressures and sexism in the workplace.

As she works within the ranks of Davis Power Inc, she ambitiously envisages an eventual position within New York City’s business elite.

In the cosmopolitan hotbed of a 21st century city, where success sees no colour or gender, Casey has left her quaint hometown at just the right time – or has she?

‘Gutz’ is an explosive, highly charged musical exploration of the seductive, hedonistic and deceptive nature of life in a metropolis, where the surface of ‘progress’ and ‘yes we can’ idealism hides the harsh reality that the more things change the more they stay the same.

We meet a host of characters consumed with power, ambition and ego, who all, in some way, will have to face the truth behind the hollow mask of the neon lights. The themes of love, harassment, infidelity and personal struggle intertwine to reveal a story reflective of the times we now live in.

The show starts at 8 pm on Friday and Saturday night and bookings are advised.
For further information, log on to www.angrianan.com or call the box office on 07491 20777.