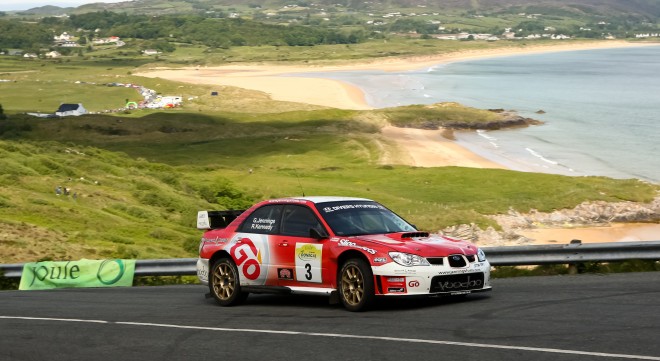 WITH June fast approaching, preparations for the Joule Donegal International Rally are in full swing. This year’s event takes place on the weekend of the 17th-19th of June and there is no doubt there will be ‘Happiness in the Hills’ that weekend.
This is the second year of Joule sponsorship and over 180 crews from Ireland, the UK and beyond will participate on the stages over the weekend. It is the only International Rally on the Irish calendar to maintain the three day format. It has been calculated by research that it annually brings approximately €25million to the local economy, making it the largest sporting event in the Northern half of the country.
Clerk of the course Eamon McGee said Joule has added an extra dimension to preparations.
“They are fantastic to work with and have fantastic promotional ideas which the team are looking forward to putting in place”.
The rally will follow its traditional format with scrutiny on the afternoon of Thursday the 16th of June. The action will get underway on Friday for the main field, and 20 special stages will be completed before the winners roll over the finish ramp on Sunday evening, where the winners will be crowned and the legendary Donegal prize giving will take place. With almost 300km of competitive stages and very compact road sections, crews will be kept on their toes all weekend. Historic crews will compete all day Saturday and Sunday, with the Junior competitors contesting the Sunday Stages.
This is the 45th year of the Joule Donegal International Rally and Eamon McGee has assured all competitors, service crews, marshals and spectators of a warm Donegal welcome.
Joule Chief Executive Ian Barret said “They have been delighted by the feedback from last year’s event and look forward to building an even stronger relationship with the team in 2016. The Joule Donegal International Rally was one of the Irish Sporting highlights of 2015 and we see the sponsorship of this event as an excellent way of promoting our brand. The excellent coverage on terrestrial Television, European wide satellite broadcast and in the print media meant the Joule name was seen by millions of people”.
Regulations are due out over the weekend and entries are expected to fill rapidly. The closing date for entries is the 13th of May. All information will be published on www.donegalmotorclub.com or on the official Facebook page

Coastal Donegal at risk of flooding within thirty years

Coastal Donegal at risk of flooding within thirty years